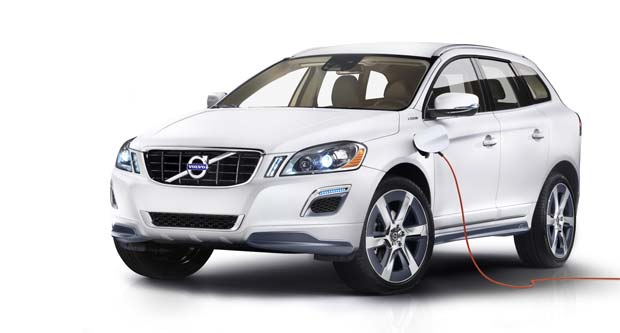 A diesel-electric V60 Plug-in Hybrid is Volvo Car Corporation’s first production model with this new technology, and the car will go on sale in Europe later this year. In order to make the solution viable for U.S. and Chinese buyers, it needs to feature a gasoline engine.

In the XC60 Plug-in Hybrid Concept, the electrification technology is blended with a state-of-the-art 280-horsepower four-cylinder gasoline engine.

The Volvo XC60 Plug-in Hybrid Concept is an electric car, a highly economical hybrid and a powerful high-performance car all rolled into one.

At the touch of a button, the driver decides how the available power from the combination of the high-performance gasoline engine and the electric motor is to be utilized.

“The gasoline plug-in hybrid is ideal for the American motorist who wants an electric car while at the same time retaining all the power and capacity that comes in his or her present vehicle,” says Stefan Jacoby, President and CEO at Volvo Car Corporation.

An electric motor producing 70 horsepower – combined with a four-cylinder turbocharged gasoline engine – gives the driver a muscular power plant packing a total of 350 horsepower. Yet this very same car can be driven up to 35 miles (charge depleting range, U.S. certification driving cycle) on electricity alone or as a high-efficiency hybrid with operational fuel economy 50 mpg. The U.S. certification standards include emissions from the production of the electric energy. According to the European certification driving cycle NEDC, CO2 emissions are 53 g/km (2.3l/100 km) – which translates into fuel economy of over 100 mpg.

The driver chooses the driving mode via three buttons on the instrument panel. The buttons give the car three distinct temperaments: Pure, Hybrid or Power.
•    In Pure mode the car is powered solely by its electric motor as much as possible. The range according to the European certification driving cycle NEDC is 28 miles.
•    Hybrid mode is the standard setting whenever the car is started. The petrol engine and electric motor co-operate to provide maximum driving pleasure with minimum environmental impact. According to the European certification driving cycle NEDC, CO2 emissions are 53 g/km (2.3 l/100 km) – which translates into fuel economy of over 100 mpg. The car has a total operating range of up to 600 miles (960 km).
•    In Power mode, the technology is optimised to create maximum possible power. The petrol engine with 280 hp and 380 Nm (280 lb.-ft.) is combined with the electric motor with 70 hp and 200 Nm (148 lb.-ft.). The electric motor’s instant torque delivery contributes to the car’s acceleration from 0 to 60 mph in 5.8 seconds (0-100 km/h in 6.1 seconds).

The rear axle of the XC60 Plug-in Hybrid Concept is driven by an electric motor producing 70 horsepower. It is supplied with power from a 12 kWh lithium-ion battery pack installed under the floor of the load compartment.

The battery pack is recharged from a regular power outlet, at home or at a parking place. Recharging time varies with the current. If 220V is available, a full charge with 12A takes just 3.5 hours. With 110V/12A a full charge takes 7.5 hours.

It is also possible while recharging the car to heat or cool the passenger compartment in order to make the start of the journey more comfortable. This also means that more battery power is available to propel the car.

The Volvo Sensus infotainment system in the XC60 Plug-in Hybrid Concept keeps the driver constantly updated on everything that makes the journey simpler, more efficient and more entertaining. A few examples of available information:
•    Best route to the destination depending on whether the driver prioritises low energy consumption, the fastest route or the shortest distance.
•    Low Emission Zones where sufficient capacity is needed for running on pure electricity.
•    Charging stations with access to renewable electricity.
•    Locations along the route with access to quick-charging facilities.