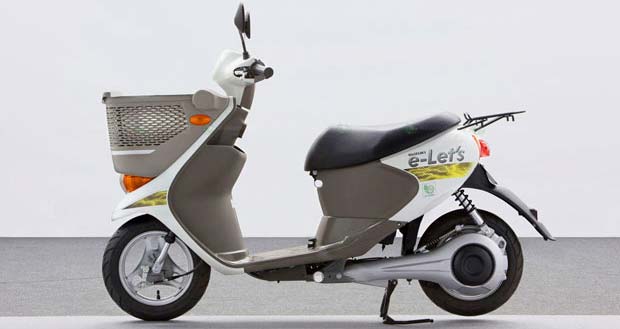 The Panasonic Group announced that it will supply its electric drive system for Suzuki’s e-Let’s electric scooter, to be released in January 2012 in Japan.

The electric drive system consists of four components: a high performance in-wheel motor and a high efficiency control circuit primarily developed by Panasonic, as well as an electric motor battery system using consumer-use lithium-ion batteries and a dedicated charger that are backed by the Group’s proven track record in the battery field.

In September 2010, the Panasonic Group, in collaboration with Suzuki, succeeded in developing a high performance in-wheel motor with regenerative braking capabilities and a high efficiency control circuit for Suzuki’s prototype electric scooters, which have undergone on-road testing.

Based on the Let’s4 Basket, a 50cm3, the e-Let’s electric scooter has combined a high-performance in-wheel motor with regenerative braking capability and a lithium-ion battery.

The scooter was created to save space, and not waste any parts, and weighs in at only 74kg, including the battery.

The lithium-ion battery has a built-in Battery Management Unit (BMU) which monitors the battery status, and can be detached to be recharged. A single charge from a Japanese 100V household outlet takes approximately four hours, giving a range of about 30km (18 miles), assuming the e-Let’s is ridden at 30km/h on level roads.

The compartment under the seat can carry either a charger or a spare battery, thus making it more convenient to charge away from home. It can also extend its range by replacing with a fully-charged battery, so it can be utilized to suit the purpose.

In addition to the basic e-Let’s which is equipped with a battery and a charger, the e-Let’s W is also available, adding a spare battery.[wzslider height=”400″ lightbox=”true”]