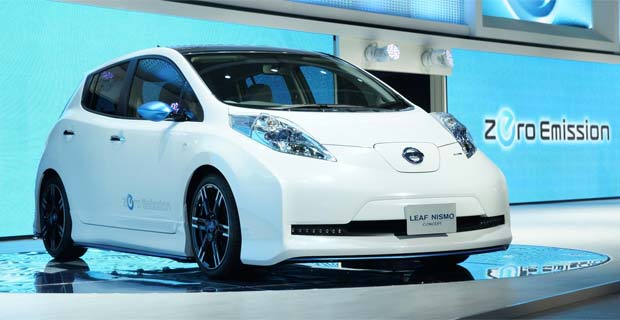 The Concept is not the first LEAF produced by Nismo. In April 2010, Nissan revealed the LEAF Nismo RC, an out and-out electric racing car, at the New York Motor Show.

With 20,000 examples sold globally since the end of 2010 and with two international awards to its name, the Nissan LEAF has proved zero emission mobility is a practical reality.

Now comes the Nissan LEAF Nismo Concept to show that electric vehicles can appeal to the heart just as much as to the head.

Central to the Concept is the stylish body kit, which gives LEAF a purposeful new look. But the modifications have been made with more than just fashion in mind – they play a significant aerodynamic role, generating extra downforce at speed to enhance LEAF’s handling and grip.

The major elements of the kit are the front aero bumper, rear under protector, rear diffuser, extended side sills and 18-inch alloy wheels. The front bumper incorporates LED lighting which is arranged transversely to accentuate a sense of motion.

The body kit has been created as an extension of the `smart fluidity’ concept that shaped the standard LEAF. It harmonises with LEAF’s sophisticated design, which endows the car with advanced aerodynamic and acoustic properties, and takes advantage of the design freedoms of the EV layout: with no conventional engine to cover, the hood line is much lower and more streamlined.

Extended side sills and the deeper bumpers front and rear emphasise LEAF’s low centre of gravity – made possible by the siting of the car’s lithium-ion batteries beneath the passenger compartment – as well as managing air flow over the body for the extra downforce. Unlike the standard car, which runs on 16-inch wheels, The Nissan LEAF Nismo Concept has 18-inch rims with lower profile tyres for added grip.

Nismo has left LEAF’s electric drivetrain untouched. One of the features of the potent 80kW AC motor is the instant supply of full torque (280Nm)… and that provides acceleration that is genuinely electrifying. It reaches 100 km/h (62 mph) in less than 7 seconds and can sprint on to a top speed of 145 km/h (90 mph).

LEAF’s lithium-ion battery, which comprises 48 modules, provides a potential range of 175km (109 miles) and can be recharged to full capacity overnight from a domestic electricity supply. It can also be charged to 80 percent capacity in just 30 minutes, using a Quick Charger.[wzslider height=”400″ lightbox=”true”]