car2go To Go Electric in Austin 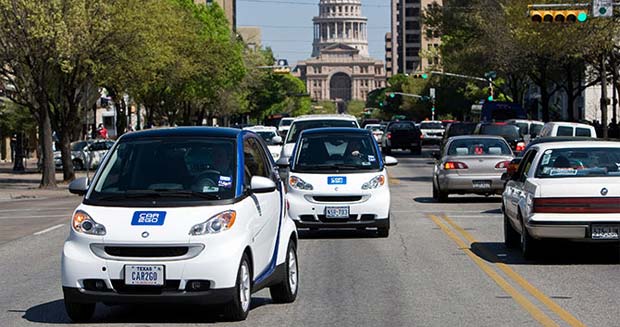 car2go, the largest carsharing network in Austin, Texas, has completed its two-year car2go North America Pilot Program with the City of Austin.

Under a newly signed agreement with the City of Austin’s car share program, car2go will continue operations in Austin.

In January 2012, car2go will begin to introduce several electric vehicles in Austin as part of its commitment to providing the most innovative and environmentally-friendly carsharing options to its members.

The car2go smart fortwo electric drive vehicles will be marked with “Electric Drive” on the side, and information about the vehicles and how to recharge them will be shared with members via email and social media.

Beginning this month, car2go members in Austin will see an updated version of the “telematic” touch screen inside the vehicle. A zoom-in and zoom-out function will now be available on the GPS navigation, and the map will now include indicators for each car2go designated parking space, so that members can easily find parking.

car2go, developed by Daimler as the world’s first free-floating carsharing network, launched its first North American Pilot Program with the City of Austin and its employees in November 2009. In May 2010, car2go opened its services to the public in Austin and, in less than two years, has grown to include more than 21,000 registered members.

The success of car2go in Austin has allowed car2go to expand to new cities throughout North America. In June 2011 car2go launched its first Canadian city in Vancouver, British Columbia; and in November 2011 car2go launched the first all-electric carsharing network in North America in San Diego, California. In Europe, car2go operates in Ulm and Hamburg, Germany; Amsterdam, Netherlands; and Vienna, Austria. Throughout the next several years, car2go will expand globally to more than 50 cities worldwide. As the car2go business continues to expand, Austin will remain a showcase city for car2go in North America, and it will continue to be the home of the car2go North America corporate headquarters.