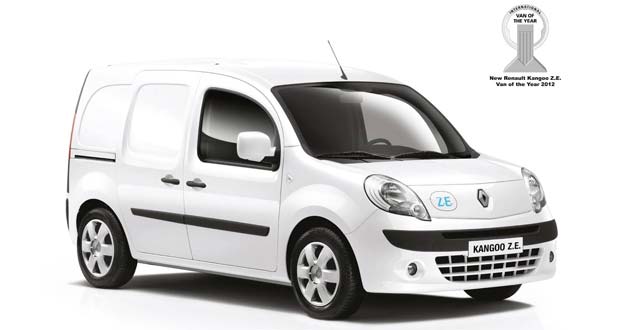 Renault  Kangoo Van Z.E. electric van has been voted International Van of the Year 2012 by a jury of 22 European journalists specializing in light commercial vehicles.

With 104 points out of a possible 168, Kangoo Van Z.E. has won the coveted International Van of the Year prize, beating the Iveco Daily, Fiat Ducato and VW Caddy.

By fitting the battery under the floor of Kangoo Van Z.E., Renault has kept the same load capacity and dimensions as the internal-combustion version.

Its engineers have also worked hard to retain the same 650kg payload. Kangoo Van Z.E. comes in two lengths and three versions, all of them produced at the MCA Maubeuge plant in France on the same line as its internal-combustion engine sister: Kangoo Van Z.E. and the two- and five-seat Kangoo Van Z.E. Maxis.

This range responds to the varied needs of business users, with load volume ranging from 3 m3 to 4.6 m3 and the flexibility to carry goods and passengers.

Kangoo Van Z.E. is the first of four vehicles in the Renault Z.E. range to be launched in the next 12 months. It  arrives in UK dealerships next month priced from £16,990 excluding VAT. The battery is hired for a monthly fee with a variety of mileage and duration permutations.  For example, a 3 year/12,000 miles per annum contract is £74 per month excluding VAT.