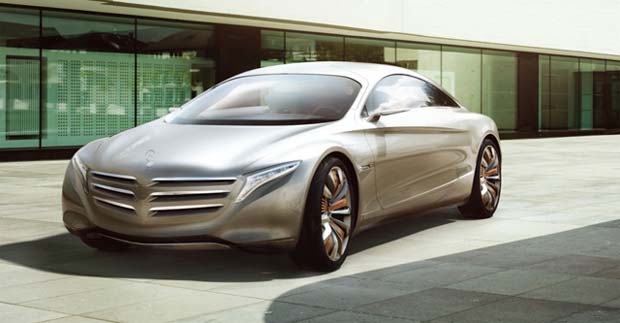 More stunningly, the F125 opens via two giant gullwing doors. They are as huge as porch roofs, and they occupy nearly 90 percent of the car’s wheelbase. Entry into the front and rear is as easy as falling into a recliner—it ought to be; there are no B-pillars in the way.

A highly advanced, very powerful lithium-sulphur battery is envisaged for the Mercedes F125. It has a storage capacity of 10 kWh and is installed behind the rear seats. Combining the fuel cell drive system with the innovative lithium-sulphur battery makes a total operating range of up to 1000 km (620 miles) possible, of which up to 50 km (31 miles) can be under battery-electric power alone. It can be inductively charged at “intelligent” charging stations, and the convenient charging process can be monitored by smartphone. When designing the F125, the developers worked on the assumption that by the time of its introduction into series production, this battery type will be capable of energy densities up to 350 Wh per kg. This would represent roughly a doubling of current performance. The real potentials of this technology are however the subject of basic research, and are still difficult to assess at present.

The tank integrated into the floor assembly has a capacity of around 7.5 kg of hydrogen. Compared to the high-pressure tanks in use today, the H2 tank potentially requires less installation space. This is because to withstand a pressure of up to 700 bar, current tanks need to be cylindrical in shape, and owing to this round cross-section there are inevitably “cavities” between tanks installed next to or above each other. In contrast, tanks that can be filled at a pressure of 30 bar or less can be better integrated into the bodyshell. At the same time they are able to act as “structural” components.