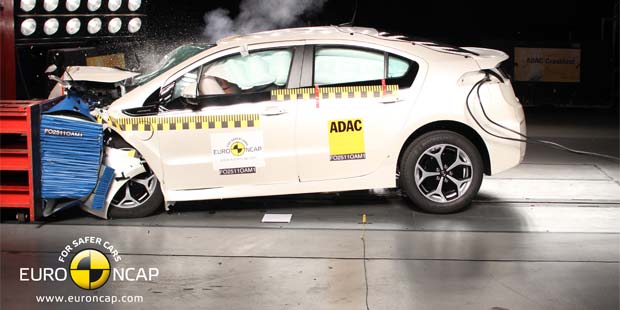 Euro NCAP continues to test plug-in and electric vehicles and announces that after the Nissan LEAF, the Opel/Vauxhall Ampera has scored an overall rating of 5 stars.

Adult occupant
The passenger cell of the Opel Ampera remained stable in the frontal impact. The car has driver and passenger airbags as standard equipment and dummy readings indicated good protection of the knees and femurs of both front seat occupants. However, structures in the dashboard were thought to present a potential hazard to occupants of different sizes and to those sat in different positions.

The Ampera scored maximum points in the side barrier test. The car also scored maximum points in the more severe side pole impact, the first car tested by Euro NCAP to do so, with good protection of all body areas. The protection provided by the seat and head restraint against whiplash injuries in a rear-end collision was marginal. The electrical safety of the car was checked after all of the impact tests and no problems were found.

Child occupant
Forward movement of the head of the 3 year dummy, sat in a forward facing seat, was not excessive and both dummies were properly contained by their restraints in the side impact test. The passenger airbag can be disabled to allow a rearward facing child restraint to be used in that seating position. However, information provided to the driver regarding the status of the airbag is not sufficiently clear. The dangers of placing a rearward facing restraint in the passenger seat without first disabling the airbag are clearly explained in a permanently attached label.

Safety assist
The Ampera has electronic stability control as standard equipment and is fitted with a seatbelt reminder for the driver, front passenger and rear seats.

Other top scorers were the Audi A6, BMW X3, Chevrolet Aveo and Chevrolet Orlando, Citroën DS5, Hyundai i40 and the VW Golf Cabriolet and Jetta.[wzslider height=”400″ lightbox=”true”]