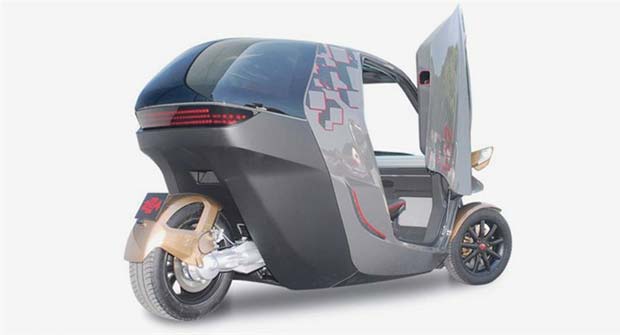 This is the KTM E3W two-seat electric three-wheeler which will be shown at the upcoming 2011 Frankfurt Motor Show next month.

To keep the E3W’s weight low, the electric three-wheeler gets a plastic body, meaning the E3W weights merely 500kg.

The KTM E3W features Lamborghini-inspired scissor doors which open vertically and seats placed exactly like in a regular car.

The KTM E3W was developed with the Austrian Technology Institute and partially sponsored by the Vienna government.

Look for reviews and live photos with ElectricCarsReport’s Frankfurt Motor Show coverage and become our fan on Facebook.[wzslider height=”400″ lightbox=”true”]