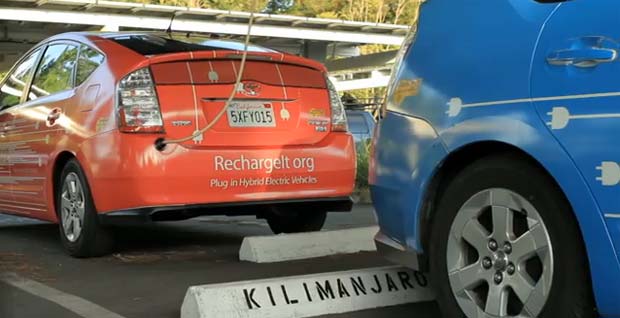 Google has deployed more than 70 electric car charging stations managed by the ChargePoint Network at its worldwide headquarters in Mountain View, CA.

The charging stations are used by employee-owned electric cars, as well as the company’s growing car sharing program for Googlers (GFleet).

”We’ve added 71 new and faster Level 2 chargers to the 150 Level 1 chargers we’ve installed over the last few years, bringing our total capacity to more than 200 chargers, with another 250 new ones on the way,” wrote Rolf Schreiber, technical program manager for electric transportation at Google, in a company blog.

With plans for 250 more charging stations on its campus, and a goal to make 5 percent of its campus parking EV-ready, Google’s installation is the largest workplace charging installation for electric vehicles in the country.

Google in 2007 purchased Toyota Priuses and Ford Escapes which are hybrids retrofitted with larger rechargeable batteries. Google now intends to expand that “Gfleet” to over 30 vehicles with the purchase of plug-in Chevrolet Volts and Nissan LEAFs.

Employees can use Gfleet vehicles to get around campus or make errands. Between its plug-in car-sharing service and its biodiesel shuttle buses, Google estimates it’s avoiding 14 million vehicle miles, or 5,400 metric tons of carbon dioxide a year.

“Over the last few years, several innovative electric vehicle technologies have emerged in the marketplace and we’ve been working to update our green transportation infrastructure. As a result, we’ve now developed the largest corporate EV charging infrastructure in the country. We’re also including the next generation of plug-in vehicles in Gfleet, our car-sharing program for Googlers,” Schreiber added.