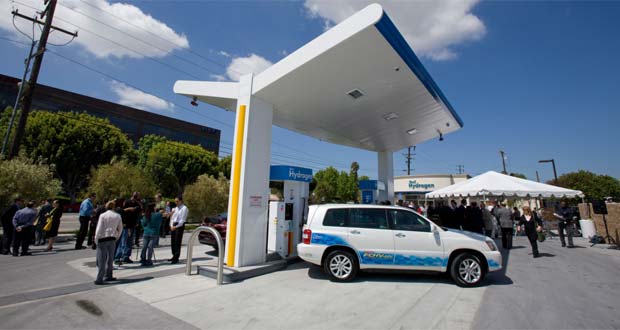 Shell and Toyota opened the first hydrogen fueling station in the U.S. fed directly from an active hydrogen pipeline.

The station is a collaborative effort between Toyota, Air Products, Shell, South Coast Air Quality Management District (SCAQMD) and the Department of Energy (DOE). The facility will provide hydrogen for the Toyota fuel cell hybrid demonstration program vehicles as well as other manufacturers’ fuel cell vehicle fleets in the Los Angeles area.

The new Shell hydrogen station, which is conveniently located in Torrance, California, next to several major freeway corridors and near the Los Angeles International Airport, taps into an existing industrial hydrogen pipeline serving a nearby refinery.

The station is also outfitted with multiple fuel dispensers, which allow for the simultaneous refueling of four vehicles in less than five minutes. The facility can dispense up to 100 kilograms of hydrogen over 12 hours.

The facility, which sits next to the headquarters of Toyota Motor Sales, will also be open to fuel-cell vehicles from other automakers.

Shell leases the land from Toyota, and manages the station for the manufacturer. The station also will feature a learning center onsite to provide hydrogen and station information to local students and the general public. Shell and Toyota will work together to populate the learning center.

The station will service Toyota’s fleet of 100 fuel-cell test vehicles that the carmaker plans to bring to the U.S. between now and 2013.