Volt and Leaf Get Highest Safety Ratings in Crash Tests 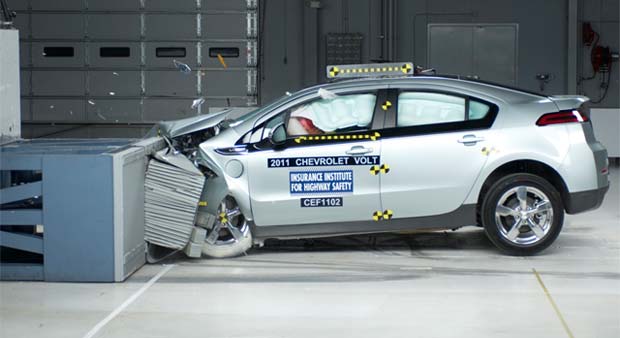 The Chevrolet Volt and Nissan Leaf earn the highest safety ratings from the Insurance Institute for Highway Safety in the first-ever U.S. crash test evaluations of plug-in electric cars.

The milestone demonstrates that automakers are using the same safety engineering in new electric cars as they do in gasoline-powered vehicles.

The Volt and Leaf earn the top rating of good for front, side, rear, and rollover crash protection. With standard electronic stability control, they qualify as winners of Top Safety Pick, the Institute’s award for state-of-the-art crash protection. The ratings help consumers pick vehicles that offer a higher level of protection than federal safety standards require.

The addition of the 2 electric cars brings to 80 the number of award winners so far for 2011, including 7 hybrid models. That lifts General Motors’ current model tally to 12 and Nissan’s to 3.

“What powers the wheels is different, but the level of safety for the Volt and Leaf is as high as any of our other top crash test performers,” says Joe Nolan, the Institute’s chief administrative officer.

The extended-range Volt and all-electric Leaf not only surpass benchmarks for protecting occupants in crashes but also exceed current fuel efficiency and emissions standards. Both models are brand new for 2011.

The Volt and Leaf are the first mainstream electric cars the Institute has tested. Last year engineers put 2 low-speed electric vehicles through side barrier tests for research purposes. Results for the GEM e2 and Wheego Whip were starkly different from results for the Volt and Leaf. Crash test dummies in the GEM and Wheego recorded data suggesting severe or fatal injuries to real drivers. The GEM and Whip belong to a class of golf cart-like vehicles that aren’t required to meet the same federal safety standards as passenger vehicles. Although growing in popularity, these tiny electrics aren’t designed to mix with regular traffic.

The Volt and Leaf are classified as small cars, with their overall length, width, and passenger capacity in line with their peers. But their hefty battery packs put their curb weights closer to midsize and larger cars. The Leaf weighs about 3,370 pounds and the Volt about 3,760 pounds. This compares to about 3,200 pounds for Nissan’s Altima, a midsize car, and about 3,580 pounds for Chevrolet’s Impala, a large family car. Larger, heavier vehicles generally do a better job of protecting people in serious crashes than smaller, lighter ones because both size and weight influence crashworthiness.

For years the debate over fuel economy has been about making cars smaller and lighter, changes that could put people at greater risk of dying or being injured in crashes. The Institute long has maintained that advanced technology is key to improving fuel efficiency without downgrading safety.[wzslider height=”400″ lightbox=”true”]