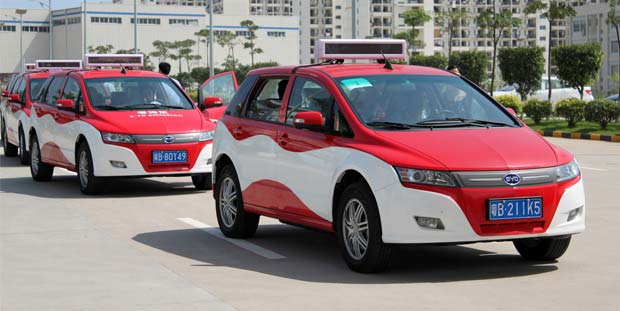 In conjunction with one year anniversary of the world’s largest all-electric vehicle Taxi fleet, BYD announced results of several of its electric vehicle pilots – the F3DM, e6 and eBUS-12 which are in fleet testing across the world.

In total, BYD electric vehicles have accumulated over 1.769 million all-electric miles and have seen no diminished range or capacity due to rapid-charging.

250 more eTaxis are being delivered to the International University in Shenzhen before August this year. According to collected data, the per-car-fuel-savings is over $1167 per-Taxi-per-month (driving an average of 400Km per day). BYD’s all-electric Taxis are expected to help Shenzhen avoid about 133 lbs (or 60.4Kg) of carbon-dioxide pollution per day per Taxi. This is an equivalent of 2,425,060 lbs (or 1.1M kg) of carbon-dioxide pollution saved by this fleet in the first year.

“This fleet of 50 e6 taxis has survived the very harsh operating conditions of hot Shenzhen summers and a very cold winter this year, and drivers and passengers alike have been extremely satisfied with their ride experience,” according to Stella Li, Senior Vice President.

The most important finding in the e6 fleet testing was that there has been no noticeable energy drop – both driving range and battery performance has been stable in rapid-charging conditions over the 1.73M miles tested – a breakthrough in EV rapid-charging. BYD has been challenged by the media about its claims of long-range electric vehicles and superior battery longevity in rapid-charging regimes since launching its first dual-mode, electric and plug-in-hybrid electric vehicles in December 2008. With the results of the e6 fleet, which was continuously rapid charged in 20- 30 minutes, BYD now has a proven track record for its Iron-Phosphate battery technology. The data is there to show vehicle charging efficiencies, consumption efficiencies, and EV ranges over time– all with rapid-charging regimes.

BYD also reported on its F3DM fleet which BYD launched in its first US tests at the Housing Authority of Los Angeles (HACLA). The BYD F3DM can travel over 40 miles all-electric but can be engaged to act as a Hybrid-Electric (HEV) to extend its range up to 300 miles. The HACLA fleet has now accumulated ~10,430 miles all-electric and 14,430 total miles (4,000 fuel-driven miles when extended range was necessary). The fleet is achieving an equivalent of 88 mpg and BYD estimates the per-car-savings—even netting out EV charging and electricity costs– is ~70%. BYD’s dual-mode cars are expected to save HACLA about 37 lbs of carbon-dioxide per-day-per-auto when driven to the EV range.

In China, BYD launched an all-electric bus fleet with the eBUS-12 in Shenzhen and Changsha, China in January 2011. These fleets have already accumulated 28,802 all-electric miles (46,380 Km) while undergoing a 3-hour-charge of the 324 Kwh FE battery. An example of the per-eBUS-savings for Shenzhen’s Bus Line 202 (driving only 200Km per day) is about $2833 monthly per eBUS. 300 more buses will be delivered to Shenzhen in August of this year. BYD’s all-electric eBUSes save about 708 lbs (or 322Kg) in carbon-dioxide emissions per eBUS per day.

BYD electric vehicles are estimated to have already saved $360,000 in fuel costs and over 2.776 million lbs of carbon-dioxide. BYD launched consumer sales of the F3DM in September 2010 and anticipates very good demand for the BYD e6 and all electric vehicles in China, fueled in part by government incentives for the purchase of electric vehicles.[wzslider height=”400″ lightbox=”true”]