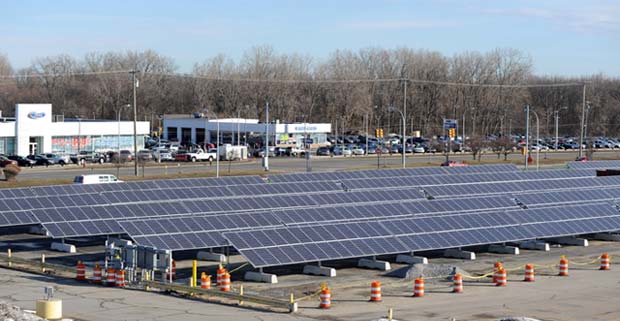 Ford collaborated with DTE Energy to install the 500-kilowatt solar photovoltaic panel system at Michigan Assembly, which will be used by Ford to power both the assembly lines and charge its electric vehicles.

The system will be integrated with a 750-kilowatt energy storage facility that can store 2 million watt-hours of energy using batteries – enough to power 100 average Michigan homes for a year. The project will also include a 50-kilowatt-hour facility to demonstrate the potential reuse of vehicle electric batteries for stationary energy storage. Xtreme Power of Austin, Texas, is supplying its Dynamic Power Resource on-site energy storage and power management system.

The renewable energy captured by the energy system will help power the production of Ford’s all-new Focus set to hit showrooms this month. The plant will also produce Ford Focus Electric and the C-MAX Hybrid and C-MAX Energi plug-in hybrid.

The solar energy installation is part of DTE Energy’s pilot SolarCurrents program that calls for photovoltaic systems to be installed on customer rooftops or property over the next five years to generate 15 megawatts of electricity throughout southeast Michigan.

The Michigan Assembly project is funded by a $3 million investment from DTE Energy’sSolarCurrents program, a $2 million grant from the Michigan Public Service Commission in support of the state’s smart-grid initiative, and approximately $800,000 worth of in-kind contributions from Ford.

Ford said it will install 10 electric vehicle charging stations at Michigan Assembly to demonstrate advanced battery charging technologies for vehicles using renewable energy and other smart-grid advances. The stations will be used to recharge the electric switcher trucks that transport vehicle parts between adjacent buildings at the manufacturing site. Part of the pilot project involves a demonstration of the possibility for using electrified vehicle batteries as stationary power storage devices after their useful life as vehicle power sources is over.[wzslider height=”400″ lightbox=”true”]