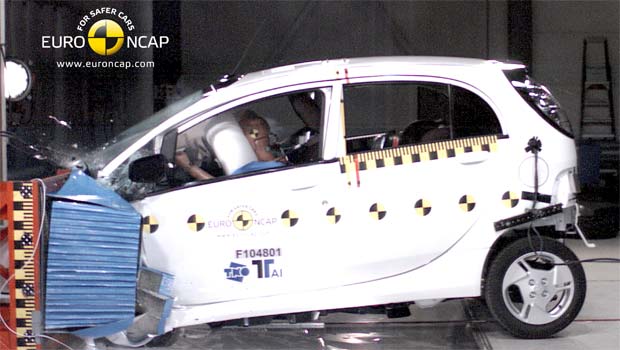 Euro NCAP announced today the outcome of its first assessment of an electric car, the Mitsubishi i-MiEV.

The car’s creditable four star rating shows that safety does not need to be compromised in zero-emissions vehicles.

The i-MiEV shares its rating with its twin models, the Citroën C-Zero and Peugeot iOn, which have the same design and safety equipment.

Dr Michiel van Ratingen, Euro NCAP’s Secretary General says: ‘We recognize the efforts done by Mitsubishi to demonstrate that plug-in battery powered cars can be as safe as others. It shows that a future 5 star accolade for EVs is not unthinkable. Whether produced by established car manufacturers or by new players on the market, consumers should expect to get electric vehicles that meet the same safety standards as conventional vehicles.’

Euro NCAP tests electric cars with live batteries and the cars are exposed to the same test conditions as the other cars in the program. Special attention is given to post-crash battery integrity and the proper functioning of the battery cut-off switch that isolates the high-voltage battery in the event of a crash. In order to test these cars in a safe manner, extra precautions are taken before, during and after testing: the tests can only be performed at laboratories with specially-trained personnel; service plugs are removed during vehicle preparation and extra fire-fighting measures are taken to ensure the safety of laboratory personnel and equipment. No electrical or fire hazards were detected during the testing of the i-MiEV.