The metropolitan areas with the largest number of plug-in electric vehicles (PEVs) on the road in the next several years will include New York, Los Angeles, and San Francisco, according to a new report from Pike Research.

The cleantech market intelligence firm also forecasts that certain utilities, such as Southern California Edison and Pacific Gas & Electric, will need to prepare for the arrival of PEVs in much larger numbers than their counterparts in other regions.

“Electric vehicle adoption will follow markedly different patterns in various parts of the country,” says senior analyst Dave Hurst. “Demographics, consumer attitudes, city and utility infrastructure, and manufacturer launch plans will all have an influence on the uptake of PEVs in different areas.” 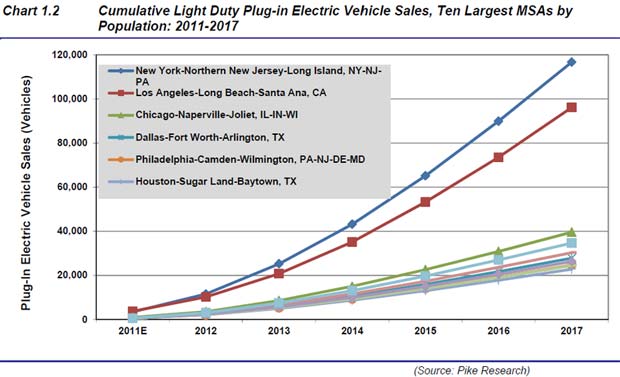 Pike Research forecasts that the top 5 metropolitan statistical areas (MSAs) for cumulative electric vehicle purchases between 2011 and 2017 will be:

Relative to population, the firm anticipates that PEV penetration rates will be the highest in several smaller MSAs including Raleigh-Cary, NC; San Jose-Sunnyvale-Santa Clara, CA; and Sacramento-Arden Arcade-Roseville, CA.
Pike Research expects that the electric utilities with the largest number of electric vehicles will be: