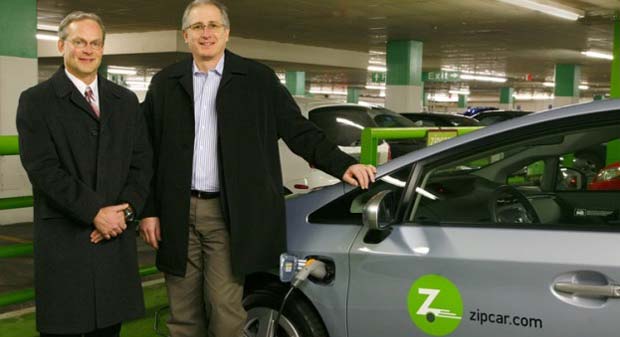 Zipcar and Toyota are introducing eight Prius Plug-in Hybrids to the car sharing company’s fleet, to test and evaluate plug-in hybrid technology and gain increased intelligence on how electric cars can fit into a large-scale car-sharing model.

The eight Prius plug-ins are part of the automaker’s early test fleet, some 160 plug-ins being tested around the U.S., as part of a global demonstration of more than 600 vehicles.  Toyota has already sent a number of Prius plug-ins to New York City as part of this program.

This testing program is designed to give consumers an early look at plug-in vehicle technology as well as to provide Toyota with customers’ reactions and suggestions.

The Prius Plug-in Hybrid vehicle can be fully charged in approximately three hours from a standard 110-volt electrical outlet, or in 90 minutes with a 220-volt connection. A fully charged Prius Plug-in Hybrid vehicle is capable of running on electricity for approximately 13 miles at speeds of up to 62 mph.  For longer distances, the PHV reverts to its hybrid mode, operating as a regular Prius.

Zipcar has about 8,000 vehicles in its fleet and roughly 530,000 members in urban areas and college campuses throughout the United States, Canada, and the United Kingdom.