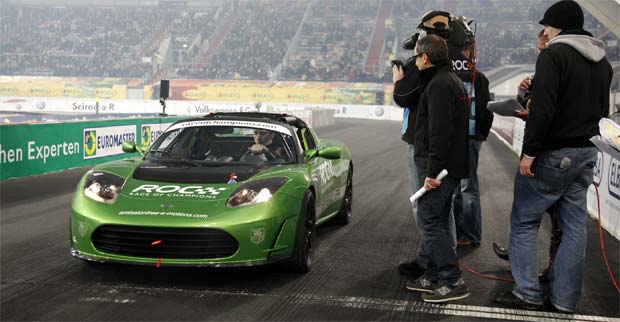 Tesla Motors has delivered its 100th German Roadster, a significant milestone in Tesla’s largest market after the United States.

The “lightning green” Tesla Roadster Sport 2.5 – raced and signed by Sebastian Vettel and other racing superstars – was delivered last weekend to Lennart Hennig, 25, an entrepreneur who founded an advertising company in Bonn, Germany. This is Hennig’s second Roadster.

“One year ago I got one of the first Tesla in Europe and my expectations got more than fulfilled,” Hennig said. “I’m proud to be again part of an important milestone in the history of electric mobility, and having the new world champion driving and sign my new Roadster makes it even better.”

Fredrik Johnsson, co-founder of the Race of Champions, handed the keys to Hennig at Dusseldorf’s Esprit Arena during the 2010 Race of Champions. During the two-day challenge, world-famous drivers including Sebastian Vettel, Michael Schumacher, Alain Prost, Travis Pastrana, Michèle Mouton, Carl Edwards and Tanner Foustraced Roadsters on the unique parallel course.

Former Formula 1 pilot and Tesla owner Erik Comas and five-time Belgian Touring Car Champion Pierre-Yves Rosoux also drove Roadsters during the ROC. Comas is purchasing a fleet of Roadsters as the cornerstone of his company Green Cars Challenge, which promotes zero-emission, high-speed fun on some of the world’s most scenic roads.[wzslider height=”400″ lightbox=”true”]