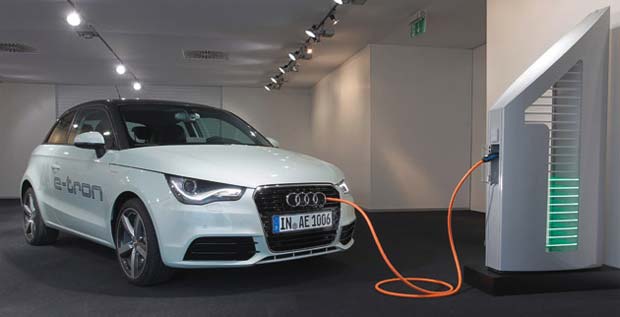 Audi has announced it will install additional photovoltaic modules a 7,500 square meter area of its main plant in Ingolstadt in Germany, which will be used to charge the batteries of the Audi’s e-tron electric cars.

Audi is again extending its cooperation with Green City Energy: in 2009 this Munich-based company installed photovoltaic modules on an area of 11,600 square meters at the Ingolstadt plant. Audi has now made an additional 7,500 square meters of roof area available on the Audi A3 body construction building, with a peak output rating of 500 kilowatts.

Approximately 460 MWh of electricity can be obtained from this new installation, enough to satisfy the annual needs of around 180 households. The extension increases the total annual output from all the plant’s installations of this type to about 1,500 MWh, of which approximately one third is used directly where it is generated.

This is the first time that solar energy generated on site has been used directly in Audi’s electricity network. As well as the new battery charging stations for electric cars, other production facilities will also use this green electricity. By reducing transmission losses, consumption at the generating point makes a worthwhile contribution to energy generation according to climate-friendly principles.

Audi also uses solar energy at its second German production plant in Neckarsulm. The photovoltaic installation there is located on the roofs of several garage parking facilities, and generates more than 1,000 MWh of electrical energy annually.