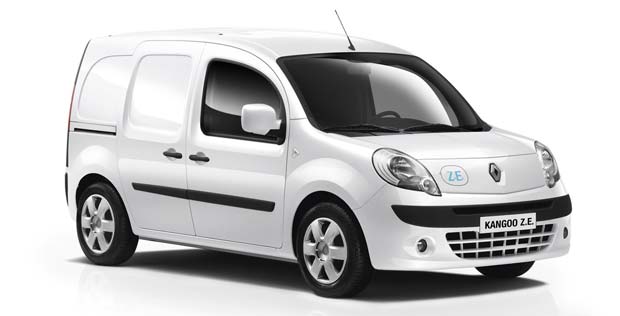 The Renault Kangoo Express Z.E., which was presented at the at the United Nations Climate Change Conference in Copenhagen, will be released in the first half of 2011 and with an operational range of 160km. The electric version of Kangoo Express features the same practical functions as the internal combustion-engined version, i.e. the same carrying capacity (from 3 to 3.5m3), the same payload (650kg) and the same high standard of comfort.

On top of that, it delivers a silent ride and responsive performances, immediate availability of torque as soon as its starts, no gear changes, low running costs and, of course, the satisfaction of owning a zero-emissions vehicle. Renault Kangoo Express Z.E. is a light commercial vehicle aimed at business users. It is due to be released in 2011 and will chiefly be used in and around built-up areas. 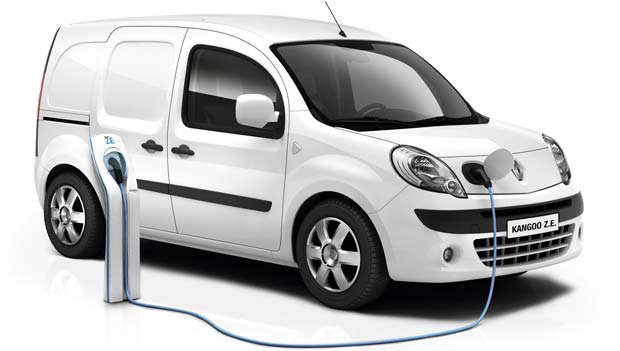 Its outstanding TCO rating (Total Cost of Ownership) makes it a first class solution for small businesses and fleet operators alike. It will also benefit from Renault’s extensive experience of van production. To this end, Renault has chosen to manufacture the electric version of Kangoo Express at its M.C.A. facilities (Maubeuge Carrosserie Automobile) in northern France. Production is due to begin in the first half of 2011.

The new vehicle will be manufactured on the same line as internal combustion-engined versions, and will consequently benefit from the same know-how, supplier network and logistical framework as the current Kangoo. The Maubeuge plant has specialized in van production for 20 years and is capable of adapting both to the broad range of specifications associated with this type of vehicle (short and long versions, with or without windows, etc.) and to demand. 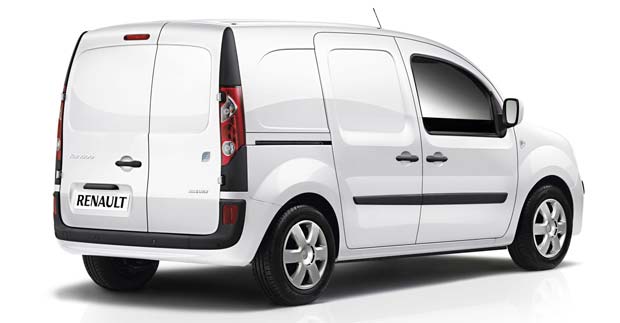 The choice of Maubeuge will enable production to get under way rapidly, while at the same time guaranteeing a very high standard of quality.

The asymmetric hinged rear doors and sliding side door provide easy access to the cargo area.

New Kangoo Express Z.E.’s overall design is similar to that of the internal combustion-engined version, with a short nose, robust front end and teardrop-shaped crystal headlamps. A chromed Z.E. badge in the form of a leaf with turquoise lettering at the rear indicates that it is an electric vehicle. The flap situated at the front of the vehicle, near the right-hand headlamp, is badged “Z.E.”, another sign that this vehicle is powered by electricity. Energy-efficiency is further enhanced by the fitment of low rolling resistance tyres.

New Kangoo Express Z.E. will be available in a choice of 11 different special effect or non-metallic body colors, and the color that has been chosen for the launch is Silver Blue.

Customers will also be to specify the colors of their business, since Kangoo Express Z.E. is above all intended for fleet use.

Kangoo Express Z.E.’s interior
Range management is a key factor when it comes to electric vehicles, and Renault has taken significant steps to make this aspect as straightforward and efficient as possible.

A specific dashboard display has been developed to ensure that the driver is kept informed about remaining battery charge and operational range:

– a gauge alongside the speedometer indicates how much battery charge remains,

– an ‘econo’-meter provides the driver with an indication of energy consumption based on a system that employs three colours: light blue depicts normal use, dark blue reveals optimal energy use, while red informs drivers when they are using excessive energy in a way that will have an adverse effect on the vehicle’s operational range,

– the speedometer needle moves across a turquoise arc,

– the trip computer’s functions are adapted to the needs of electric vehicles. It displays remaining range and remaining battery energy (kWh), as well as real-time and average energy consumption.

An all-electric motor
Renault Kangoo Express Z.E. is an all-electric vehicle. Renault Kangoo Express Z.E. is powered by a 44kW electric motor which boasts energy efficiency of 90 per cent, a figure that is far superior to the 25 percent associated with internal combustion engines which suffer from energy losses. For example, when an electric vehicle consumes 10kWh of energy, 9kWh is actually transmitted to the wheels, compared with just 2.5kWh in the case of an internal combustion engine.

This motor revs to 10,500rpm and instantly delivers peak torque, which is a constant 226Nm. Acceleration from low speed is particularly responsive. The electric motor is very quiet, too. The 22kWh battery is located beneath the boot floor and does not affect Kangoo Express Z.E.’s load capacity. When the driver presses the accelerator pedal, the lithium-ion battery transmits energy to the electric motor. The latter converts this energy into mechanical movement which is in turn transmitted to the driven wheels. The battery charges whenever the vehicle decelerates. When the driver lifts his or her foot from the pedal, the vehicle’s kinetic energy is recovered by the motor which converts it into electric current. The current generated is stored in the battery.

The vehicle’s other ride-related performance features (control of body roll, steering, etc.) are identical to those of the internal combustion-engined Renault Kangoo Express.

Battery charging
Renault Kangoo Express Z.E. is charged via a socket located behind a flap alongside the right-hand headlamp. A conventional charge via a household mains supply (16A 220V) will charge the vehicle in between six and eight hours. This method is perfectly suited to vehicles that are parked up overnight or during the day at the workplace.

Renault Kangoo Express Z.E. will go on sale in the first half of 2011 with an operational range of 160km.[wzslider height=”400″ lightbox=”true”]