Following the unveiling of Fluence Z.E. Concept at the 2009 Frankfurt Motor Show, Renault has taken the wraps off the finalized design of Fluence Z.E. which is due to go on sale in Europe and Israel from 2011.

As the C segment’s first production saloon electric vehicle, Renault Fluence Z.E. targets motorists and fleet operators who are looking for a status-enhancing vehicle that is botheconomical to run and respectful of the environment.

Renault Fluence Z.E. will be manufactured at the OYAK-Renault factory in Bursa, Turkey, on the same production line as the internal combustion engine-powered versions of Fluence. Production is due to begin in the first half of 2011. 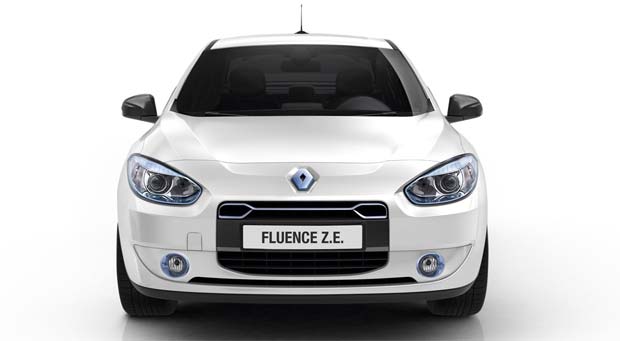 As the compact segment’s first three-box electric vehicle, it was imperative that Renault Fluence Z.E. should be recognizable at first glance. To distinguish it from the internal combustion engined-version, it comes with a package of specific features and details that unmistakably associate it with Renault’s electric vehicle range.

The electric version of Fluence stands at a length of 4.75 meters, which is 13 centimeters longer than its internal combustion-engined cousin in order to accommodate the battery behind the rear seats. At the same time, the lines of its flanks have been revised in order to maintain the same overall balance as the original version.

Renault Fluence Z.E.’s lines are taut and fluid, while the rear quarter panels have been harmoniously extended in order to absorb the additional length resulting from the longer rear overhang. This design encases the rear screen in a way that recalls the rear-end styling of prestigious sports coupés, while a gloss black trim at the bottom of the screen emphasizes the rear’s harmonious proportions. The design of the rear lights, which extend forward either side of the car, also contributes to the overall balance of Renault Fluence Z.E.’s lines. The clusters themselves feature a pattern made up of backlit blue-hued lozenges.

Gloss black exterior mirror housings, body-color painted side protective mouldings and the battery charge flaps on both wings add the finishing touch to Renault Fluence Z.E.’s uniquely expressive looks, as do the boot lid’s blue-hued panel and the Fluence Z.E. badge. Last but not least, the rear bumper incorporates a black diffuser which is engineered to reduce aerodynamic drag, while the wheels have been specially designed to minimize turbulence.

Several body colours are available, including Energy Blue, a new colour that is specific to Renault’s electric vehicle range.

Renault Fluence Z.E. is conclusive proof that electric vehicles do not have to be small, narrow and uncomfortable city cars with a limited touring ability. The new model is the same width as the internal combustion engined-version of Fluence, and the cabin space it delivers is worthy of that of a saloon car from the next segment up, including best-in-class front and rear elbow room.

Renault Fluence Z.E.’s interior is based on the same layout as the internal combustion-engined version. Only the rev-counter has been replaced by a bespoke instrument which displays data concerning remaining range and battery charge. The decorative trim of the uncluttered dashboard is picked out in a colour that is exclusive to the model, while the centre console includes the displays “forward”, “reverse”, “neutral” and “parking” which are the different positions for the transmission control lever.

Renault Fluence Z.E. targets families looking for a spacious, comfortable vehicle, and total boot space amounts to 300dm3 (VDA/ISO). The electric version of Renault Fluence is likely to figure on the shopping list of many fleet operators thanks to its low running costs.

· Motor
Fluence Z.E. is powered by a synchronous electric motor with rotor coil. Peak power is 70kW at 11,000rpm, while maximum torque is 226Nm. The weight of the motor – excluding peripherals – is 160kg. Acceleration performance is crisp and linear, with maximum torque available very early on.

· Battery
The capacity of Renault Fluence Z.E.’s lithium-ion battery is 22kW/h. The battery itself tips the scales at 250kg and is located behind the rear seats in order to free up a boot volume of 300dm3 (VDA/ISO). An energy recovery system enables the battery to be charged when the car decelerates.
· Battery charging methods
It will be possible to charge the battery of Renault Fluence Z.E. in one of three ways:
– Via a household mains supply (10A or 16A, 220V) which will fully charge the battery in between six and eight hours. This method is particularly suited to vehicles which are charged during the workday or at night, since it permits owners to benefit from the off-peak rates available in certain countries.
– At fast charge stations using a 32A 400V supply which enables the battery to be charged in approximately 30 minutes (available in 2012 or 2013, depending on model).

– The QuickDrop battery switch system will enable Renault Fluence Z.E.’s battery to be swapped in approximately three minutes at bespoke battery exchange stations.
· Chassis
In order to adapt the ride to Renault Fluence Z.E.’s specific characteristics (dimensions, weight distribution), the suspension has revised settings compared with the layout seen on internal combustionengined versions of Fluence. The front suspension setting is softer, since electric motors are lighter than all the internal combustion engines available for Fluence. Meanwhile, the rear suspension has been revised to cope with the heavier weight due to the presence of the battery.
· Tires

Renault Fluence Z.E. runs on low rolling resistance tyres. The Goodyear-developed EfficientGrip enables lower energy consumption thanks to extensive work on tyre casings and sidewalls. The tread is identical to that of a conventional tyre in order to ensure high-performance road holding and braking.

The ABS and ESC electronic driving aids have been recalibrated. On the passive safety front, Renault Fluence Z.E.’s body structure has been strengthened in order to deliver the same high standard of safety performance as the shorter and consequently lighter internal combustion-engined version.

Renault Fluence Z.E. will be manufactured at the OYAK-Renault factory in Bursa, Turkey, on the same production line as the internal combustion-engined versions of Fluence. Production will begin in the first half of 2011. This solution will enable Renault to minimize capital outlay and get production under way rapidly, while at the same time guaranteeing a very high standard of quality.

The production of Renault Fluence Z.E. at Bursa will also permit Renault to benefit from plant’s outstanding performance in terms of quality, cost and delivery times, as well as from its local network of suppliers. This in turn means that the Group will be able to market this zero-emission saloon car at prices that are as attractive as those of the internal combustion-engined versions of the model.