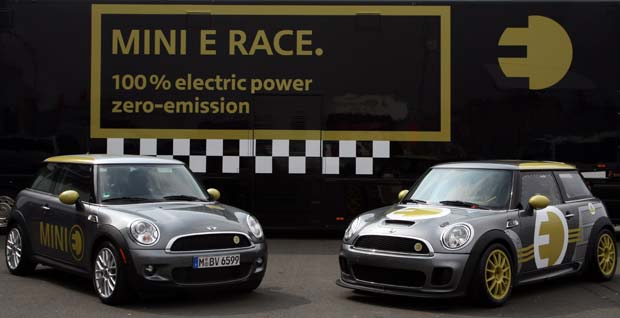 An electric-powered MINI E Race, a modified race-spec version of the standard MINI E, completed a lap of the legendary 20.8 km (12.9-mile) Nurburgring’s North Course in a time of 09:51.45 minutes.

Driven by former DTM racer Thomas Jager, the MINI E, as expected, didn’t exactly post a new Nurbugring record with its lap time, but scorching the track with the MINI E wasn’t part of BMW’s plan either.

Instead of showing off its sheer speed – or lack thereof – BMW used this test run to show that, despite being an electric car, the MINI E can still pull off a respectable time around the Nurburgring. The MINI E Race hit a top speed of 187 km/h (115.9 mph).

To put this in perspective, the internal combustion Cooper S gets around a minute quicker.

The MINI E Race was fitted with a special lightweight body and a roll cage in order to ensure optimum performance and safety on the track. And various other components, such as the suspension, brakes and tires, are also race specification.

Other than that, however, the car relies almost exclusively on the standard technical make-up of the MINI E. Powering the E Ray to its electric vehicle Nurburging record lap was a 150kW/204hp asynchronous electric motor powered by 5 088 lithium-ion cells. The control electronics and the software were reprogrammed to achieve an optimal driving performance for the Nurburgring’s North Course. The power from the emission-free motor is channeled to the front wheels via a single-stage helical gearbox with a lengthened gear ratio.

Separately, the search is on for 20 drivers to take part in phase two of a pioneering trial to test the UK’s first ever electric MINIs.

Phase one of the trial is currently underway, the first 20 MINI E pioneers took ownership of their electric MINIs in December 2009 and are due to hand them back in June.

People living in a triangular geographical area between Andover, Oxford and West London will be able to take part in the ground-breaking project and so interested drivers are being urged to fill out the online application form at www.electricMINI.co.uk.

The drivers chosen will be able to lease the two-seater cars from September 2010 for six months. Southern Electric will install a free home charging point for each car, as well as a network of public charging points, so the cars can be ‘topped up’ whilst drivers are out and about.  The car can also be charged from a standard three pin socket.

The monthly lease fee will be £330 a month, including VAT, insurance* and maintenance (*subject to conditions).  Thanks to the consortium being awarded part of a £25m fund by the British Government’s Technology Strategy Board, this is £220 less than the standard monthly lease for this type of high tech car. The MINI E driver only pays for the electricity used – and obviously has no petrol costs. In addition MINI E drivers are eligible for other benefits like zero congestion charges in London.[wzslider height=”400″ lightbox=”true”]