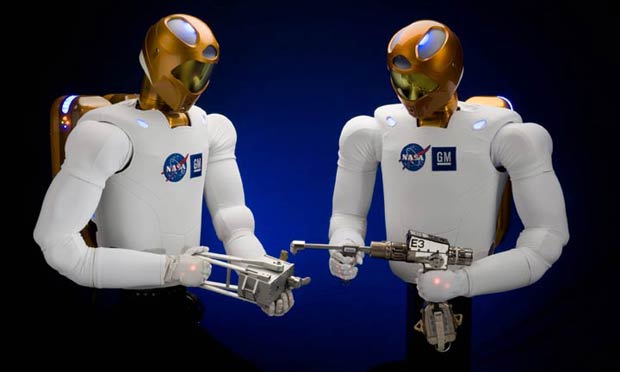 Engineers and scientists from NASA and GM worked together through a Space Act Agreement at the agency’s Johnson Space Center in Houston to build a new humanoid robot capable of working side by side with people. Using leading edge control, sensor and vision technologies, future robots could assist astronauts during hazardous space missions and help GM build safer cars and plants.

The humanoid robot Robonaut was first designed and built by NASA in a collaborative effort with the Defense Advanced Research Project Agency a decade ago.

Robonaut 2, or R2, is a faster, more dexterous and more technologically advanced robot. This new generation robot can use its hands to do work beyond the scope of prior humanoid machines. R2 can work safely alongside people, a necessity both on Earth and in space.

The idea of using dexterous, human-like robots capable of using their hands to do intricate work is not new to the aerospace industry.

During the past decade, NASA gained significant expertise in building robotic technologies for space applications. These capabilities will help NASA launch a bold new era of space exploration.

The two organizations say the partnership is about creating technologies that will help both the automotive and aerospace industries.