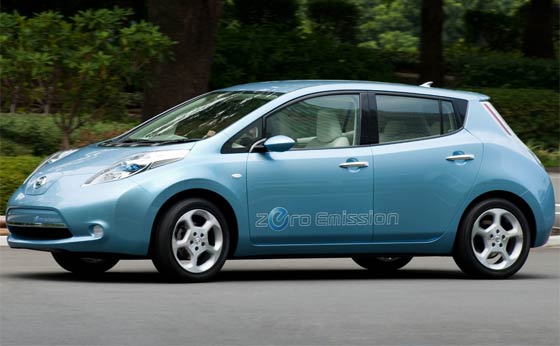 The Nissan Leaf is an electric car announced by Nissan in last August at Nissan’s Yokohama headquarters.

Designed as a four-to-five seat hatchback, Nissan says the Leaf is not just for use as a specialty urban runabout, but rather, it was designed as an everyday vehicle – a “real car” whose 160-kilometer+ (100 mile) all-electric range meets the needs of 70% of the world’s motorists.

Nissan Leaf is powered by laminated compact lithium-ion batteries, which generate power output of over 90kW, while its electric motor delivers 80kW/280Nm.

Nissan plans to lease the battery for the upcoming Leaf EV for roughly $150 U.S. per month in addition to the cost of the car which will be in the $25-30,000 range.

Nissan Leaf’s frontal styling is characterized by a sharp, upright V-shaped design featuring long, up-slanting light-emitting diode (LED) headlights that employ a blue internal reflective design that announces, “This car is special.”  But the headlights do more than make a statement.  They are also designed to cleverly split and redirect airflow away from the door mirrors, thus reducing wind noise and drag.  And, the headlights provide yet one more benefit in that they consume about 50 percent of the electricity of conventional lamps, which helps Nissan Leaf to achieve its world-class range autonomy. 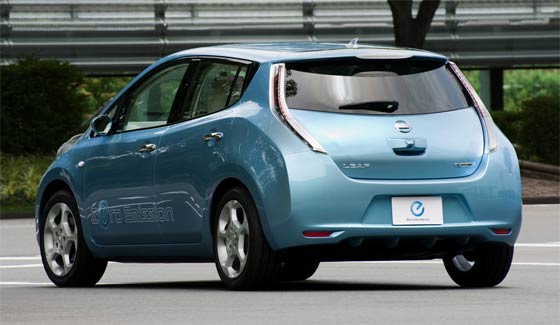 While Nissan promises to deliver the Leaf to its first American customers in late 2010, it isn’t immediately clear where it will be made available, to whom, and how.

Commercial US production would begin in late 2012 at Nissan’s manufacturing facility in Smyrna, Tennessee.

Nissan isn’t just dumping its sleek entry into the market — it’s also building a home charger with new partner AeroVironment and partnering with local, state and federal governments — both in the U.S. and abroad — on public charging stations.

On October 22nd, 2009, Nissan announced that it would be traveling across North America to 22 cities, 11 states, the District of Columbia, and Vancouver, Canada with the Leaf as part of their Zero Emission Tour.

Zero-emission mobility programs under the banner of the Renault-Nissan Alliance include partnerships with countries such as the UK and Portugal, local governments in the Japan and the USA, and other sectors, for a total of nearly 40 partnerships worldwide.