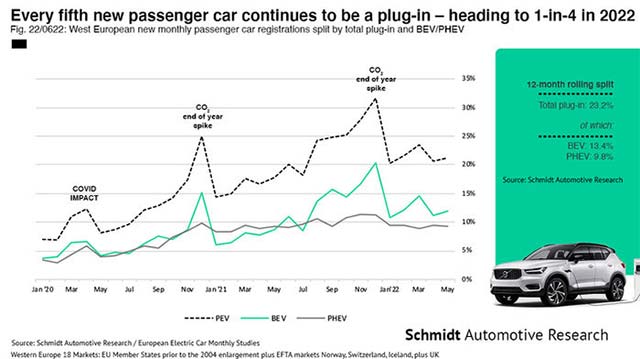 For the 11th consecutive month, monthly registrations of new plug-in passenger cars across W-Europe continued to account for over 20% of the total market up to May 2022 according to the monthly European Electric Car Study’s data.

By the end of 2022, the study expects every fourth new car entering the 18 market region to be either a BEV or PHEV over a 12-month annual basis with significant order backlogs to be cleared.

Volkswagen AG alone says they have an order backlog of 300,000 BEV-only vehicles alone for the West European region with a significant push expected during the second half once the Hanover (ID.Buzz) and Emden (ID.4) plants begin easing those backorders.

BMW Group are also increasing the production rate of their i4 model in Munich while Tesla’s German site, despite having a slow ramp-up, is expected to slowly increase production volumes for the region as OEMs once again race to meet EU CO2 fleet average emissions targets with effectively no super-credit tools left to reach their weight-based fleet targets.

A pull-forward in sales is potentially inflating the German plug-in market this year – accounting for 28% of the total West European plug-in market during the opening 5-months of the year – as purchase subsidies are set to be cut in 2023.