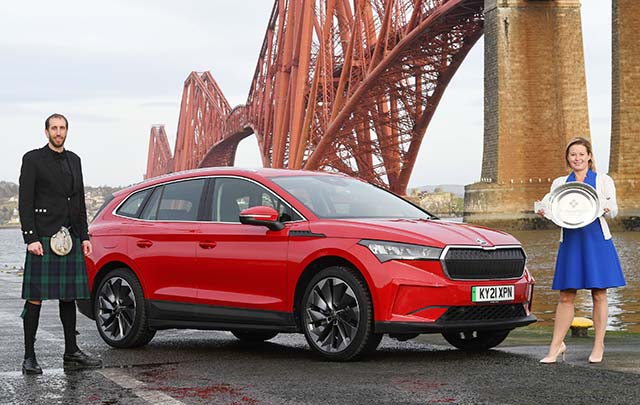 Skoda has put in a dominant performance at the 2021 Scottish Car of the Year awards, claiming four category wins and the overall title of the Car of the Year. Remarkably, all five awards were claimed by just two models; the Enyaq iV and the Octavia, which proved unbeatable in all the categories they were eligible for.

The Enyaq iV – Skoda’s first purpose-built electric car – was named as class winner in the Best EV £35k and above category and was awarded the coveted Scottish Car of the Year title. The family-sized Czech-built SUV impressed the judging panel with its practicality and value, and scored highly in every key category.

Commenting on the Enyaq’s win, the Association of Scottish Motoring Writers (ASMW) President Jack McKeown said: “This year saw a slew of new and impressive EVs enter the market. Amongst a very talented field of new cars it was the Enyaq iV that stood out to our members.”

Focusing on the Enyaq iV’s unique qualities, McKeown added: “The Enyaq iV’s bold styling, exceptional practicality, an excellent range, lots of onboard technology and – most importantly – a great driving experience put it ahead of the opposition. It was a very worthy winner for our £35K+ EV category and thoroughly deserves to be our overall Scottish Car of the Year.”

In what was another record-breaking night for Skoda, the Octavia also topped three categories, winning Best Family Hatchback, Best Estate and Best Plug-in Hybrid. Commenting on the Octavia’s remarkable hat-trick of Scottish titles, Jack McKeown said: “The Octavia has been a great car for a long time and gets better with each new generation. Even by Skoda’s high standards the 2021 model is exceptional.”

Highlighting the Octavia’s all-round ability, McKeown added: “Whether in hatchback or estate body styles, the Octavia is practical, refined and feels more premium than ever before. It now comes with some excellent hybrid models and an impressive hot hatch version. With so many strengths it’s little wonder it triumphed in three SCOTY categories.”

Both the Octavia and Enyaq iV are no strangers to the winners circle, having already been awarded some of the biggest accolades in the industry. Although Enyaq iV deliveries to UK customers only started in late June, the Czech-built family SUV has now been named Car of the Year by four different industry titles. This remarkable performance highlights the Enyaq iV’s strength in depth and appeal to a broad range of buyers and drivers.

The Enyaq iV is the first fully-electric car to be built at Skoda’s main Mladá Boleslav factory and has enjoyed huge demand across Europe since its launch earlier this year. Available in the UK with two battery size options; 62kWh and 82kWh the Enyaq iV delivers a WLTP driving range of up to 331 miles and can be rapid DC charged to 80% in as little as 38 minutes.