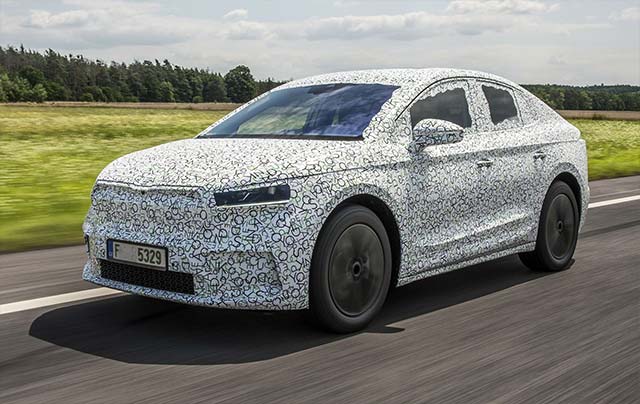 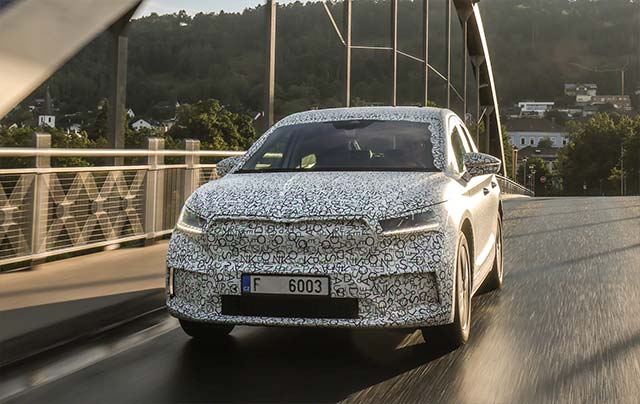 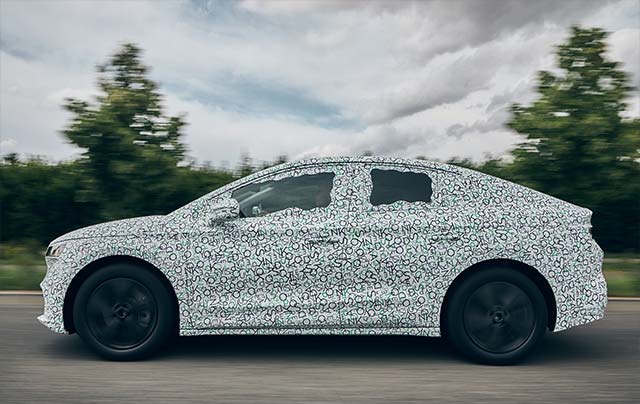 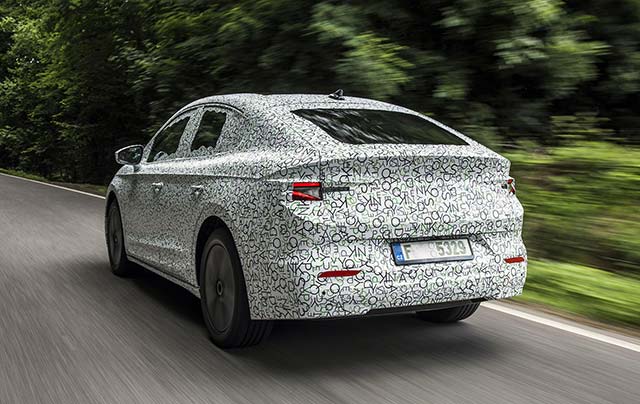 Following the successful launch of the Skoda Enyaq iV, Skoda Auto is adding a new body variant to its first all-electric SUV range: the four-door Skoda Enyaq Coupé iV is characterised by an elegant, sloping rear.

Its drag coefficient (cd) of 0.247 is even lower than the aerodynamic Enyaq iV SUV, making the Enyaq Coupé  iV more efficient and enabling it to cover more than 332 miles in the WLTP cycle when fitted with the larger battery.

There is a choice of two battery sizes and three power variants with rear- or all-wheel drive. Just like in the Enyaq iV, the classic trim levels for the interior have been replaced with the Design Selections. In typical Skoda A style, the Enyaq Coupé  iV boasts a generously sized interior and a boot capacity of 570 l.

Thomas Schäfer, Skoda Auto CEO, said: “We have made a great start on the international markets with our all-electric flagship Skoda Enyaq iV. The vehicle has been very well received by our customers, and roughly 70,000 orders have been placed. In early 2022, we will be upping the ante with the Enyaq Coupé  iV: this variant of our e-SUV is even more emotive and presents a real design highlight, rounding off the top end of our model range.”

The Skoda Enyaq Coupé  iV is an excellent addition to the Enyaq iV line-up and offers a truly dynamic car for customers who enjoy an active lifestyle. With generous amounts of space for up to five people and a 570-litre boot, it is a great vehicle for families. There is a choice of three power variants for this latest model: the Enyaq Coupé iV 60, Enyaq Coupé  iV 80, both with rear-wheel drive, and the all-wheel-drive Enyaq Coupé  iV 80x. Boasting even better aerodynamics than the Enyaq iV and a drag coefficient of 0.247, the four-door coupé is more efficient and, in the variant with the larger of the two available batteries and rear-wheel drive, it can cover over 332 miles in the WLTP cycle. The fast-charging feature, which comes as standard, ensures the car is ‘refuelled’ quickly. The 13-inch central touchscreen is a real eye-catcher in the interior.

Emotive lines and panoramic glass roof as standard
The new Skoda Enyaq Coupé iV features an emotive design. The panoramic glass roof, which is part of the standard equipment, slopes gently towards the rear from the B-pillar. At a length of 4,653 mm and measuring 1,617 mm in height, the coupé is four millimetres longer than the Enyaq iV and one millimetre higher. At 1,879 mm and 2,765 mm respectively, the width and wheelbase of both models are identical, while the coupé’s 570-litre boot capacity is almost on a par with the SUV’s 585 l. Large alloys measuring 19 to 21 inches emphasise the car’s powerful appearance. Full-LED Matrix headlights are optional. Within these, each high-beam module features 24 LEDs, which can be controlled individually and enable the driver to have the high beam on at all times without dazzling other road users. Full-LED rear lights are also optional. These feature a crystalline design and characterise the brand’s signature C-shaped light cluster and dynamic indicators. The Crystal Face, where a total of 131 LEDs illuminate the vertical slats and horizontal trim of the striking Skoda grille, is another option for the Enyaq Coupé iV. The LED modules of the full-LED Matrix headlights for low beam and high beam, as well as the daytime running lights, create an animated welcome effect.

Interior with Design Selections
Skoda offers innovative Design Selections and a clear menu of options available for the Enyaq Coupé  iV’s interior. The Design Selections are inspired by modern living environments and replace the classic trim levels. The style, colours and materials used are tastefully coordinated. In its basic configuration, the Design Selection ‘Loft’ presents itself as modern, homely and family-friendly. The combination of grey and black shades is timeless. Sustainable materials are available in other Design Selections. The seat covers in the Lodge Selection, for example, are made of 40% natural new wool with the Woolmark Company quality seal, and 60% polyester (each one is made from 318 recycled PET bottles). The cognac-coloured leather upholstery of the seats in the ecoSuite Selection is tanned through an eco-friendly and sustainable process using olive leaf extracts without the use of any chemicals.

13-inch touchscreen and comprehensive range of standard equipment
The centrally positioned 13-inch touchscreen is a key feature in the interior. It can be personalised and provides access to the infotainment system as well as all vehicle functions. On a 5.3-inch screen, the Digital Cockpit informs the driver of the most important information, such as speed, driving data, navigation and active assistance systems. The optional head-up display projects additional information – in part using augmented reality – in clear view of the driver. The Enyaq Coupé  iV’s extensive range of standard interior features includes dual-zone Climatronic, a keyless KESSY GO system and LED ambient lighting. This illuminates the decorative trim on the doors and the door handles as well as the front and rear footwells. The clear structure of the choices available includes ten optional themed packages, most of which come in both a basic and a more comprehensive Plus version. Select individual options are available for all models.

Two batteries, three power variants, and rear- as well as all-wheel drive
SKODA offers two battery sizes and three different power variants for the Enyaq Coupé iV. The batteries are stored in the floor of the Volkswagen Group MEB car platform. The Enyaq Coupé  iV 60 is fitted with a lithium-ion battery with a capacity of 62 kWh, of which 58 kWh net can be used. The electric motor produces 132 kW and drives the rear wheels via a single-speed gearbox. The Enyaq Coupé iV 80 is also a rear-wheel drive, powered by an electric motor with an output of 150 kW. When fitted with the larger 82-kWh battery pack (77 kWh net) and thanks to the car’s excellent aerodynamics boasting a drag coefficient (cd) of 0.247, this variant can cover 332 miles – offering the greatest mileage within the model range.

The Enyaq Coupé iV 80x is equipped with the larger battery, which also powers a second, 80-kW electric motor on the front axle, providing this variant with all-wheel drive. Together, the two electric motors deliver a total of 195 kW. The Enyaq Coupé iV can be charged at public DC fast-charging stations with an output of up to 125 kW. The iV universal charger – a mobile solution with interchangeable connector plugs – is available as an optional extra.

The Enyaq iV: a global success story for Skoda
The Enyaq iV was an immediate success in the international markets. From the outset, Skoda’s first production model based on Volkswagen Group’s MEB modular electric car platform appealed to experts, the media and customers alike. Demand is currently exceeding Skoda’s production capacity at its main plant in Mladá Boleslav – the only location in Europe outside of Germany where an MEB-based model rolls off the line. In the tests conducted by the independent European New Car Assessment Programme (Euro NCAP), the all-electric SUV was awarded the maximum rating of five stars. The Enyaq iV scored 94% for the protection of adult passengers and 89% for children, which is the best result ever in the Euro NCAP tests. The Enyaq iV also received the prestigious Red Dot Award for outstanding product design and collected further awards from automotive trade publications in Germany (Europe’s largest car market). For example, readers of the auto motor und sport magazine voted Skoda’s new flagship as the best compact import SUV / off-road vehicle in 2021, and readers of Auto Zeitung awarded the ‘Auto Trophy’ to the Enyaq iV as the best import e-SUV. In the readers’ choice ‘All-wheel-drive car of the year’ by Auto Bild Allrad, the SUV was nominated the best import in the ‘Electric car with all-wheel drive’ category. And to add to its popularity, the Enyaq iV won the title ‘Best electric large SUV’ in the ‘Electric car of the year 2021’ awards by British magazine What Car?, and it was voted as this year’s best family car by electrifying.com.