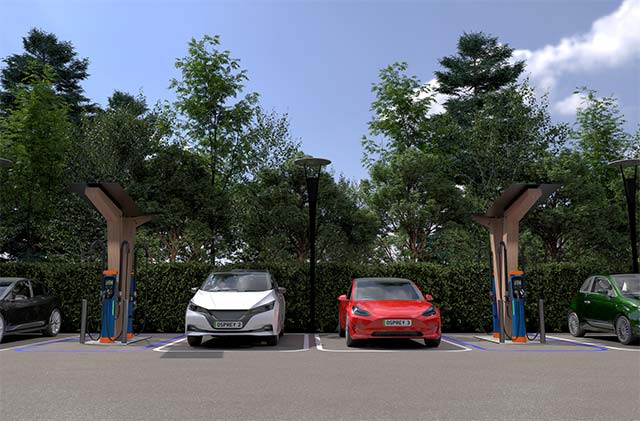 Osprey Charging announces its ambition to make charging anxiety a thing of the past, by installing over 150 high-powered EV charging hubs across the UK by 2025.

A total of 1,500 150-175KW rapid chargers will be installed across the sites, which will be located on strategic A-roads and adjacent to motorways, to encourage motorists to switch to electric cars ahead of the 2030 ban on new petrol and diesel cars.

The £75 million rollout, from one of the UK’s largest and fastest-growing public rapid EV charging networks, will see game-changing new charger optimisation technology deployed publicly for the first time in the UK. Kempower charging technology enables more locations than ever to host multiple rapid chargers on a single site without compromising on charging power or requiring prohibitively expensive grid connections. The technology has the potential to revolutionise EV charging deployment in the UK by intelligently load balancing to maximise the amount of charge that each vehicle receives. The Kempower technology will complement the market-leading Tritium charging hardware also being deployed on new sites by Osprey.

Charging anxiety – the fear of hard to use, unreliable or unavailable charging infrastructure – is a major concern for EV drivers and a key barrier to greater adoption, according to EVA England, the country’s trade body for the EV industry. Osprey’s multi-charger, power-optimising hubs solve this challenge by ensuring drivers can turn up and charge without having to wait for a charger to be available.

Ian Johnston, CEO of Osprey Charging, said: “The EV market is booming, with sales up over 117% year-on-year and EV adoption continuing to grow exponentially. In less than nine years’ time, buying a new petrol or diesel car will be impossible, so it’s crucial that public charging infrastructure stays ahead of the curve. Through this rollout we will make charging anxiety a thing of the past. High-powered, multi-charger hubs will herald a new era of public EV charging – enabling mass EV adoption and a clean transport revolution. Our rollout of hubs across the country’s major transport routes will ensure drivers are supported with convenient, reliable, on-the-go charging, delivering the best possible consumer experience for UK motorists.”

Construction is already underway at four sites and Osprey’s first hub will open next month in Wolverhampton, adjacent to the A463 near the M6. Construction will commence on all of the first 10 hubs before the end of the year, with over 150 hubs consisting of 1,500 150-175kW chargers, opening on major transport routes, motorways, A-roads and popular destinations over the next four years.

Each rapid charger is capable of adding 100 miles of range in as little as 10 minutes and each hub will be located near food and drink amenities, allowing drivers to make use of the facilities while they charge their car. For example, Osprey’s first four hubs are adjacent to well-known and popular retailers, including Costa Coffee, Lidl, Aldi, Pizza Hut, KFC and Curry’s PC World.

All Osprey chargers are compatible with every rapid charging EV on the market today and do not require a membership or subscription to initiate charging – drivers can simply tap their contactless bank card or smartphone.

In a UK-first, Osprey’s hubs will deploy a game-changing new technology – Kempower – which is enabling more locations than ever before to host multiple high-powered chargers on a single site.

Kempower chargers work together to optimise charging across multiple vehicles when more than one EV is plugged in at the same charging hub. They allow power to be distributed based on demand, which varies significantly between individual vehicles due to the maximum charging rate of each model and its battery percentage at the point of charge.

This power management can reduce waiting times for charging significantly, maximising the speed and availability of chargers for drivers, and increasing consumer footfall for the landowners hosting the hubs.

The load-balancing technology also means grid connections can be optimised, allowing multiple high-power chargers to be installed per site and offering higher charging speeds without the need for more grid power. The physical footprint of each charger is also reduced by 74%, allowing space for more chargers, improved accessibility and reducing their visual impact to support planning permission.