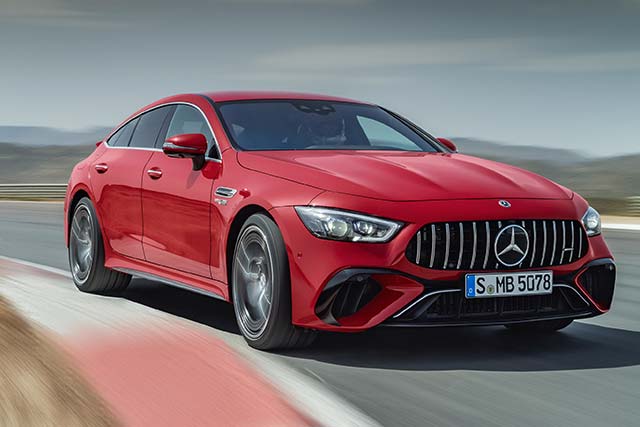 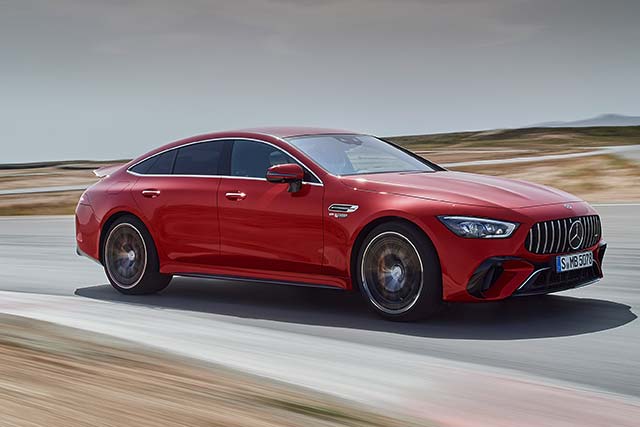 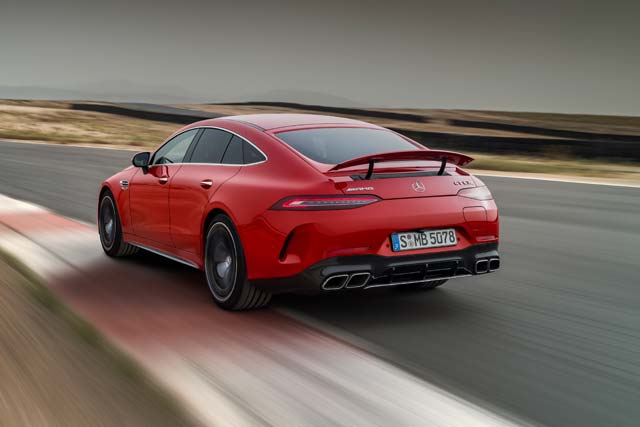 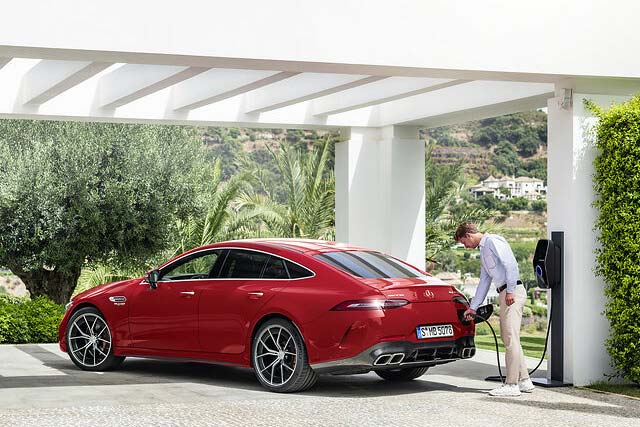 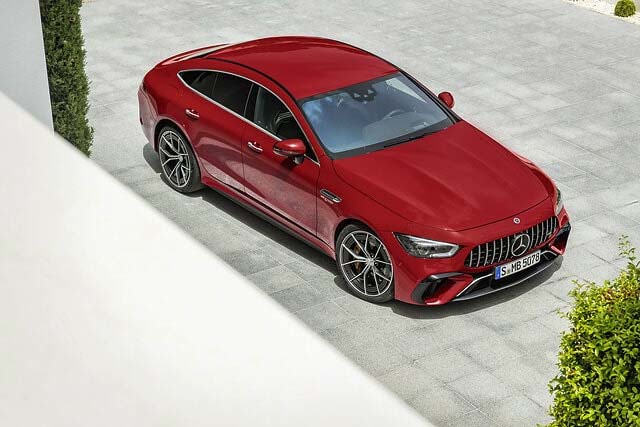 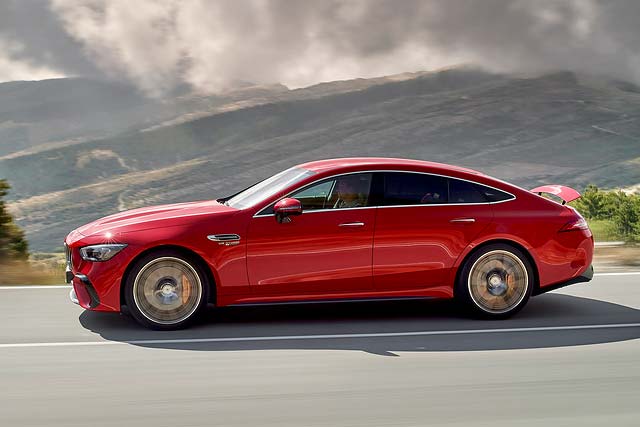 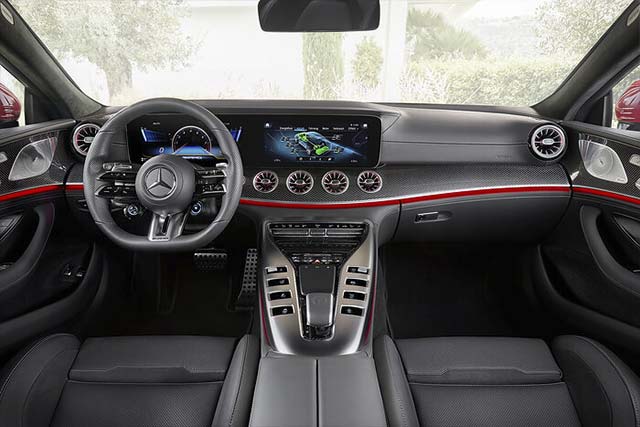 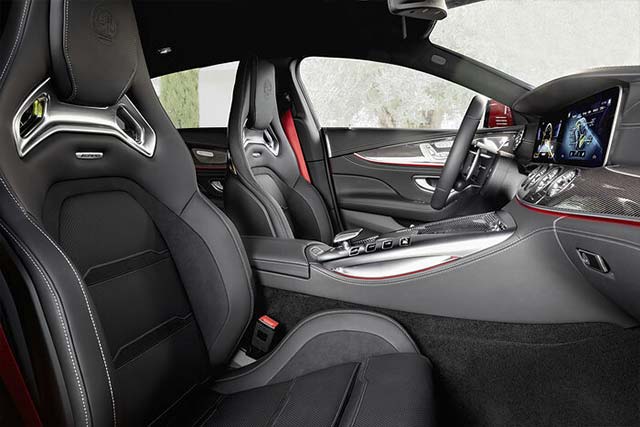 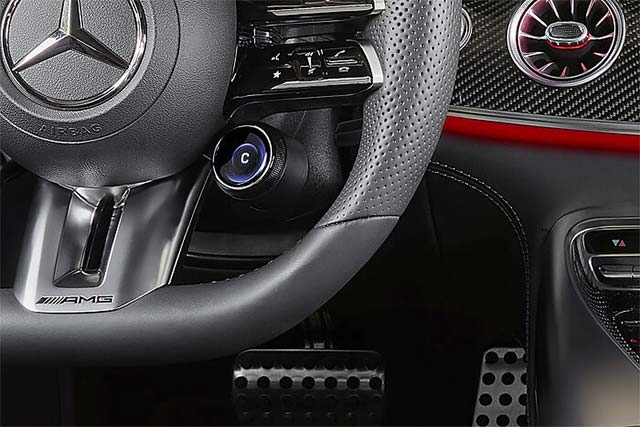 The first performance plug-in plug-in hybrid from Mercedes-AMG is entering series production and draws on technologies from Formula 1. The concept includes a distinctive drive layout with electric motor and battery on the rear axle as well as a high-performance battery developed in-house.

The combination of 4.0-litre V8 biturbo engine and electric motor generates a system output of 620 kW (843 hp) and a maximum system torque of more than 1,400 Nm. The electric drive’s immediate response at the rear axle, rapid torque build-up and improved weight distribution make for a new, highly dynamic driving experience. As in Formula 1, the battery is specifically designed for fast power delivery and draw. The electric range of 12 kilometres allows a practical operating radius, for example in the city or in residential areas.

“With the new Mercedes-AMG GT 63 S E PERFORMANCE we are transporting our brand DNA into an electrified future. In doing so, we are following our own technical path, which is what has always made AMG so special and desirable. Developed entirely in Affalterbach, the performance plug-in plug-in hybrid offers a fascinating level of driving dynamics and rightly bears our new technology label E PERFORMANCE. With this new concept, we are also opening up to new target groups who will experience Mercedes-AMG as the performance luxury brand of the 21st century. Our departure into AMG-typical electrification is flanked by a large-scale campaign. And I am delighted that we have also been able to win over a special partner for this in the form of superstar will.i.am, who we have been able to inspire with our technology”, says Philipp Schiemer, Chairman of the Board of Management of Mercedes-AMG GmbH.

The expressive design with a low front section, muscular body, squat greenhouse and dynamic fastback highlights the sporty genes of the four-door coupé. Another striking feature is the characteristic front apron, which is based on the design of the two-door AMG GT. It appears to be cast from a single mould, and blends homogeneously into the dynamic design of the overall vehicle. The outer air intakes are wider and more pointed towards the centre of the car. The airflow is channelled to the wheel arch coolers by three vertical fins.

Exclusive identification features at the rear are the rear apron with integrated plug-in charging flap and the model designation highlighted in red. With the plug-in plug-in hybrid, AMG is also introducing externally fluted trapezoidal twin exhaust tailpipes. The “E PERFORMANCE” badge on the wings indicates the plug-in plug-in hybrid drive. As in the entire model series, numerous paint finishes and equipment features are available for the plug-in hybrid version. For example, there are four matt paint finishes, five metallic finishes and two non-metallic finishes to choose from. In addition, there are seven new paint finishes from the extended customisation range. The exterior design can be further accentuated with the new AMG Night Package II or a combination of the Night Package and Carbon Package, for example. In addition, there are new 20 and 21-inch light-alloy wheels, each in two colour variants. The exclusive Edition is also available for the performance plug-in hybrid.

As the new flagship of the model series, the AMG GT 63 S E PERFORMANCE is particularly extensively equipped. It has received all the upgrades of the latest model facelift, such as the AMG RIDE CONTROL+ suspension with new damping system. Also on board as standard are the adapted AMG ceramic high-performance composite brake system and the MBUX multimedia system with special plug-in hybrid displays.

The standard AMG Performance steering wheel with its distinctive twin-spoke design and seamlessly integrated control buttons also offers tangible and visible added value. The three rounded twin spokes combine strength with lightness. The round AMG steering wheel buttons impress with brilliant displays and their perfect turn-and-press operating logic. This allows important driving functions and all driving modes to be controlled without having to take one’s hands off the steering wheel. As a new feature, it is possible to select the regeneration levels of the plug-in hybrid drive via the steering wheel buttons.

Many individual choices are available in the interior. Exclusive colours emphasise either the sporty or luxurious side of the new flagship model – for example the combination of Exclusive nappa leather in titanium grey pearl/black with contrasting topstitching in yellow or fine Exclusive nappa leather in truffle brown/black in the STYLE trim (diamond stitching). In addition there is a choice of five further colours in Exclusive nappa STYLE leather: sienna brown, classic red, yacht blue, deep white and neva grey. The seats in the front and rear are completely single-tone in the chosen interior colour, as are the armrests in the doors, the leather edging of the floor mats and the steering wheel rim.

The details of the AMG-specific Performance plug-in hybrid drive: combustion engine in the front, electric motor in the rear

In the AMG GT 63 S E PERFORMANCE, the 4.0-litre V8 biturbo engine is combined with a permanently excited synchronous electric motor, a high-performance battery developed in Affalterbach and the fully variable AMG Performance 4MATIC+ all-wheel drive system. The combination of the 4.0-litre V8 biturbo engine and electric motor generates a system output of 620 kW (843 hp) and a maximum system torque of more than 1,400 Nm. The driving performance of the most powerful series-production vehicle from Affalterbach to date is correspondingly impressive: acceleration from a standstill to 100 km/h takes just 2.9 seconds, and 200 km/h is reached in less than ten seconds. Acceleration only ends at 316 km/h.

The 150 kW (204 hp) electric motor is positioned at the rear axle, where it is integrated with an electrically shifted two-speed gearbox and the electronically controlled limited-slip rear differential in a compact electric drive unit (EDU). Experts refer to this layout as a P3 plug-in hybrid. The lightweight high-performance battery is also located in the rear above the rear axle. This compact design has numerous advantages:

Inspired by Formula 1, developed in Affalterbach: the AMG high-performance battery

When defining the electrification strategy, it was clear from the outset that all essential components would be developed in Affalterbach. At the heart of this is the AMG high-performance battery (HPB). Development of this lithium-ion battery was inspired by technologies that have already proven themselves under the toughest conditions in the Mercedes-AMG Petronas F1 team’s Formula 1 plug-in hybrid racing cars. In the course of development, there was a lively exchange of expert knowledge between the High Performance Powertrains (HPP) Formula 1 engine shop in Brixworth and Mercedes-AMG in Affalterbach. The AMG high-performance battery combines high power that can be called up frequently in succession with low weight to increase the overall performance of the vehicle. Added to this are the fast energy draw and the high power density. This means that during a brisk drive in hilly terrain, for example, drivers can immediately call on the full power potential on uphill stretches, while regeneration is strong when driving downhill.

The high-performance battery of the AMG GT 63 S E PERFORMANCE has a capacity of 6.1 kWh, 70 kW of continuous output and 150 kW of peak output for ten seconds. The low weight of only 89 kilograms allows the very high power density of 1.7 kW/kg. For comparison: conventional batteries without direct cooling of the cells achieve about half of this figure. Charging is via the 3.7 kW on-board AC charger, at a charging station, wallbox or household socket. The battery is designed for fast power delivery and draw, not for the longest possible range. Nevertheless, the electric range of 12 kilometres allows a practical operating radius, for example for quiet and emission-free driving from a residential area to the outskirts of the city or to the motorway.

The innovation push: the direct cooling of the battery cells

The basis for the high performance of the AMG 400 volt battery is the innovative direct cooling: for the first time, a high-tech coolant based on an electrically non-conductive liquid flows around all 560 cells and cools them individually. Every battery needs a defined temperature for optimum power delivery. If the battery becomes too cold or too hot, it noticeably loses power at times, or has to be regulated to avoid damage if the heat becomes excessive. The even temperature of the battery therefore has a decisive influence on its performance, service life and safety. Conventional cooling systems, which only cool with air or the entire battery pack indirectly with water, quickly reach their limits – especially as the requirements continue to increase due to cells with ever increasing energy density. If the thermal management does not fulfil its function optimally, the battery is at risk of ageing prematurely.

For the direct cooling, the AMG specialists had to develop new cooling modules that are only millimetres thin. Around 14 litres of coolant circulate from top to bottom through the entire battery past each cell with the help of a specially developed high-performance electric pump, also flowing through an oil/water heat exchanger attached directly to the battery. This conducts the heat into one of the vehicle’s two low-temperature (LT) circuits, and from there to the LT radiator at the front of the car where it is released into the outside air. The system is designed to ensure even heat distribution in the battery.

The result is that the battery is always within a consistent, optimum operating temperature window averaging 45 degrees Celsius, no matter how often it is charged or discharged. It may well be that the average temperature is exceeded when driving at high speeds. The protection mechanisms are therefore configured so that the maximum performance can be obtained from the battery, with the temperature level subsequently lowered by direct cooling. Conventional cooling systems cannot cope with this, and the battery can no longer fully utilise its potential. That is not the case with the AMG high-performance battery: even during fast laps in plug-in hybrid mode on the race track, where acceleration (battery is discharged) and deceleration (battery is charged) are frequent, the energy storage system retains its high performance capacity.

Only effective direct cooling makes it possible to use cells with a very high power density. Thanks to this individual solution, the battery system is particularly light and compact. The low weight is also due to the material-saving busbar concept, and the lightweight yet strong crash structure of the aluminium housing. It ensures the highest level of safety.

New brand ambassador will.i.am and marketing campaign: “Everything but quiet”

Mercedes-AMG is also breaking new ground in communicating the new plug-in hybrid model. The US-American global star and entrepreneur will.i.am will act as a long-term partner and brand ambassador for the “Future of Driving Performance” vehicles with an electrified powertrain.  The Black Eyed Peas co-founder and frontman, musician, producer and tech entrepreneur is the recipient of seven Grammy Awards, an Emmy Award, a CLIO Award and an Honorary Fellowship from the Institution of Engineering and Technology (IET).

But that’s not all: will.i.am is a true car enthusiast who extensively modifies his private vehicles with a high level of technical and aesthetic understanding. He has a keen eye for innovations that bridge the gap between culture and technology. He strives to improve things down to the last detail, extend boundaries and question the accepted until the optimum solution is found – just like the Mercedes-AMG team when developing the performance and sports car models. The long-term partnership between will.i.am and Mercedes-AMG focuses on projects relating to the company’s electrified future and musical themes.

The new AMG GT 63 S E PERFORMANCE transports the DNA of AMG Driving Performance into an electrified future. Accordingly, “Everything but quiet” is the essential theme and claim of the campaign film for the presentation of the new model. The centrepiece is a 60-second film devised and directed by British star photographer and director Rankin as a sophisticated interplay of characteristics shared by the two game-changers will.i.am and the AMG GT 63 S E PERFORMANCE.

Technical data at a glance