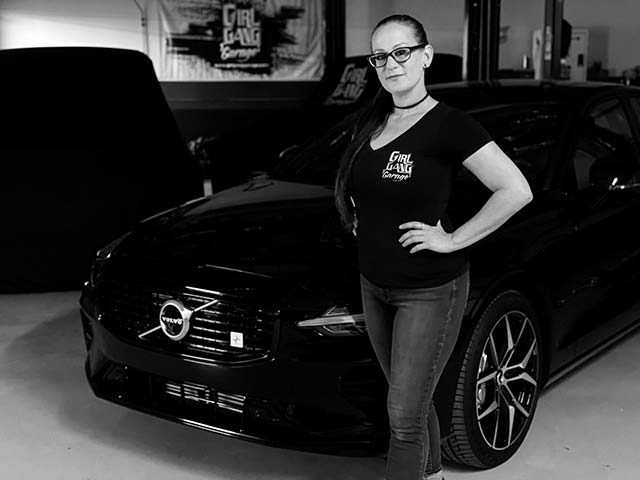 For this year’s SEMA Show in Las Vegas, Volvo Cars is partnering with celebrity custom car builder Bogi Lateiner to call attention to the need for more women in the auto industry with a custom, plug-in hybrid car project that merges 1960s style with modern technology, power and efficiency.

Lateiner is the founder and leader of Girl Gang Garage, a network of women committed to increasing gender diversity in the automotive industry. The collaboration highlights Volvo Cars’ dedication to increasing the number of female technicians within its retail network through accelerated training programs for current automotive technicians, recent graduates and military veterans.

Lateiner and her team of professional and amateur female mechanics, body technicians, painters and welders, alongside a group of talented female technicians in Volvo Cars’ network that are Hybrid-Certified, are merging a 1961 Volvo PV544 coupe with components from a Volvo S60 T8 Recharge Polestar Engineered sedan to create “Iron Maven”: a modern plug-in hybrid with classic design.

Iron Maven is the third All Female Build from Girl Gang Garage and is also the most complex to date. It represents the largest build of its kind, with more than 150 women participating from around the world. The Volvo Cars Technical Support team, based in both the United States and in Sweden, are assisting the team with select component and system integration.

A ‘barn find’ in the Phoenix, AZ area, the PV544 represents a combination of modest classicism and the company’s heritage. The car will be adapted and updated to accommodate the technologically advanced elements from the S60 T8 Polestar Engineered sedan, including the415 horsepower plug-in hybrid.

The Polestar Engineered suspension, modern vehicle control systems and the Sensus infotainment system are planned to be integrated into the new car. Major modifications, custom 3D-printed components, by-hand fabrication and technical analyses ensure the final car carries through the essence of classic, current and forward-looking elements and approaches.

The finished product is scheduled to be unveiled at the 2021 SEMA Show in Las Vegas on November 2.