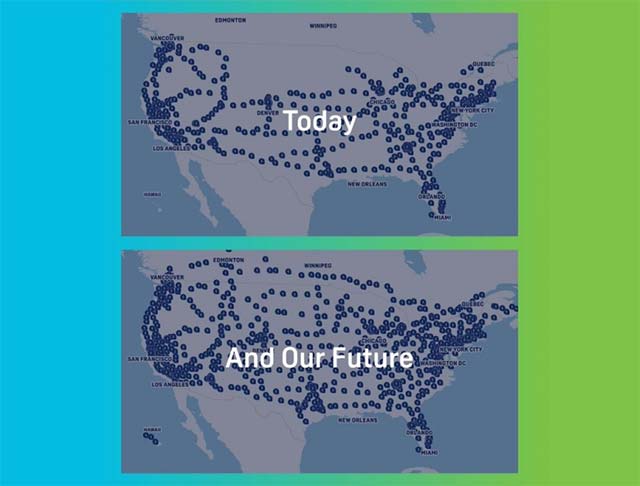 Electrify America today announced its “Boost Plan” to more than double its current electric vehicle charging infrastructure in the United States and Canada, with plans to have more than 1,800 fast charging stations and 10,000 individual chargers installed by the end of 2025. The expansion will increase the deployment of 150 and 350 kilowatt chargers – the fastest speed available today – and help pave the way for more electric vehicles in North America.

The announcement today expands Electrify America’s previous commitment to invest $2 billion over 10 years in Zero Emission Vehicle (ZEV) infrastructure, education, and access in the U.S. In addition to adding to its existing network in the U.S., Electrify America will also expand its Electrify Canada charging network which began installations in 2019.  Both initiatives are part of a global announcement today by the parent company Volkswagen Group to substantially increase public charging infrastructure in North America, Asia and Europe.

“We have decided to double our current charging infrastructure in North America over the next four years to help meet the need for the rapid growth expected of electric vehicles by virtually all the auto manufacturers, and to help make EV adoption more accessible and attractive than ever,” said Giovanni Palazzo, president and chief executive officer, Electrify America. “We are making this commitment to support the plans by major automakers and the U.S. and Canadian governments to help the transformation to an electric mobility transportation system.”

Electrify America
Electrify America is the largest, open DC (Direct Current) Fast Charging network in the U.S. This new commitment builds on the company’s plans to have about 800 charging stations and approximately 3,500 individual chargers in the U.S. by the end of 2021 and will increase the total number of charging stations to more than 1,700 and 9,500 individual chargers by the end of 2025. The company has installed on average four stations per week since its first charging station opened a little over three years ago in May 2018.

As part of the expansion, Electrify America will not only multiply its presence in established U.S. regions, but also add the states of Hawaii, North Dakota, South Dakota, West Virginia, Wyoming and Vermont, bringing Electrify America’s network to 49 U.S. states and the District of Columbia.

Building upon Electrify America’s current two cross-country and two coastal routes for cross-country travel, part of this expansion will add a new electric vehicle charging highway to the upper Midwest, providing necessary EV infrastructure to enable electric mobility in the region. The additional investment will enhance and grow current ultra-fast charging stations in cities where Electrify America already operates, as well as expand upon offerings in regions such as the California Central and San Joaquin Valleys and many new cities such as Austin, Detroit and Minneapolis/St. Paul.

Electrify Canada
Electrify Canada will increase its current commitment of 32 stations to more than 100 charging locations and 500 chargers over the next 4.5 years. The 68 additional charging stations will continue Electrify Canada’s focus on providing electric vehicle charging at strategic locations in metropolitan centers, along major highways and near popular amenities.

Electrify Canada will expand its network to nine provinces, adding stations in Saskatchewan, Manitoba, New Brunswick, Nova Scotia and Prince Edward Island, providing the ability for most electric vehicles to travel from Halifax, Nova Scotia in the east, along an Electrify Canada route to Victoria, British Columbia in the west.

The company will also bolster its network in the four provinces it currently offers service increasing the number of stations in British Columbia, Alberta, Ontario and Quebec.

A Better Charging Experience
“The addition of more charging stations, combined with the ability to serve nearly all models of EVs on the market and offer the fastest speed available today, will help propel Electrify America and Electrify Canada in the pursuit of our mission in advancing the deployment of zero emission vehicles,” said Giovanni Palazzo.

As part of the largest public fast charging network in North America, the new charging stations will maintain the company’s standards of providing a seamless, high-quality charging experience in a comfortable and convenient atmosphere.

Electrify America is using customer insights and data to build stations with purpose for the most enjoyable and efficient charging possible. Charging stations will continue to be installed at convenient metro and highway locations with nearby amenities. The company is also installing canopies at select stations that help shelter customers from the elements and provide enhanced lighting. Customers will experience easy payment solutions, such as Plug & Charge for capable vehicles, to make charging convenient and simple at every station. Additionally, the company is investing in integrated battery storage solutions that reduce the impact on the grid and allows deployment of charging stations in areas where it would not previously be feasible.

Enhancing the company’s customer-centric charging experience is Electrify America’s recent full redesign of its industry-leading mobile app to provide EV drivers with a simple and inclusive ‘one stop’ solution for all their transportation and mobility needs. The new app offers improved functionality and an intentionally approachable interface that is welcoming to new and existing customers alike, providing an ever more seamless charging experience.