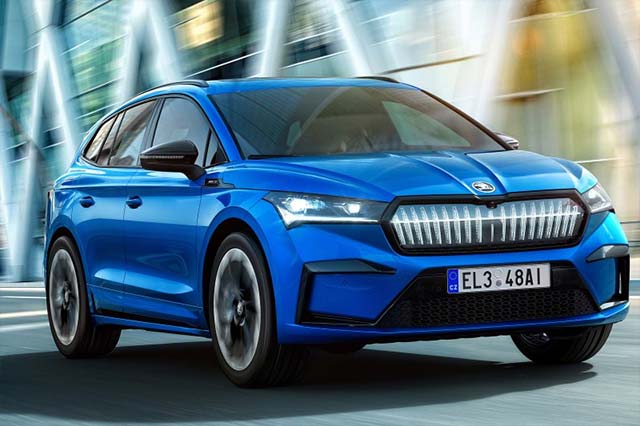 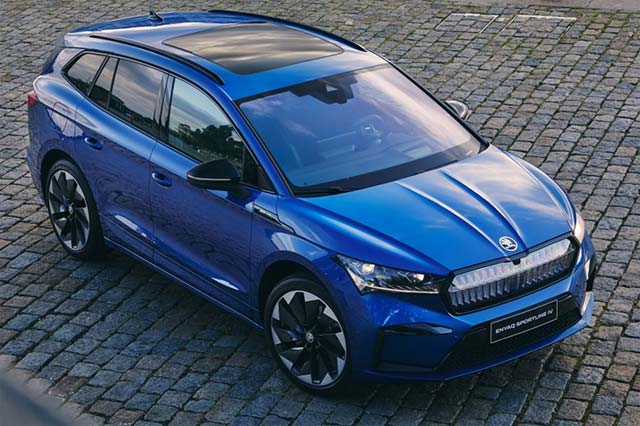 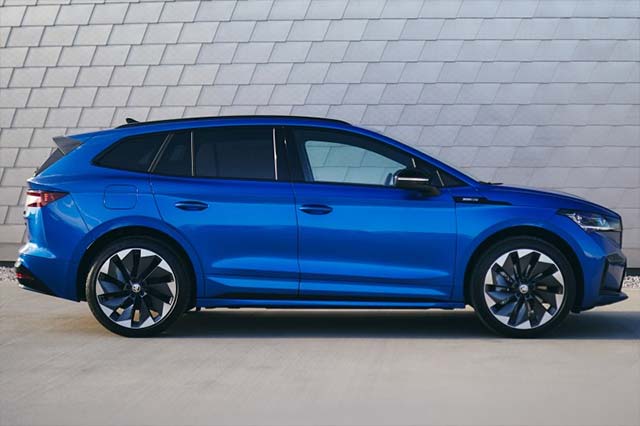 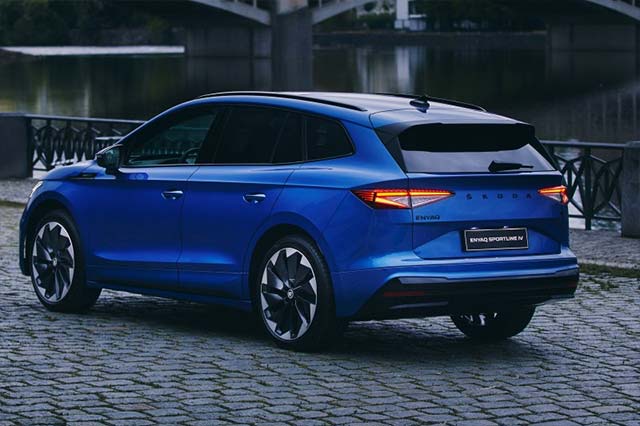 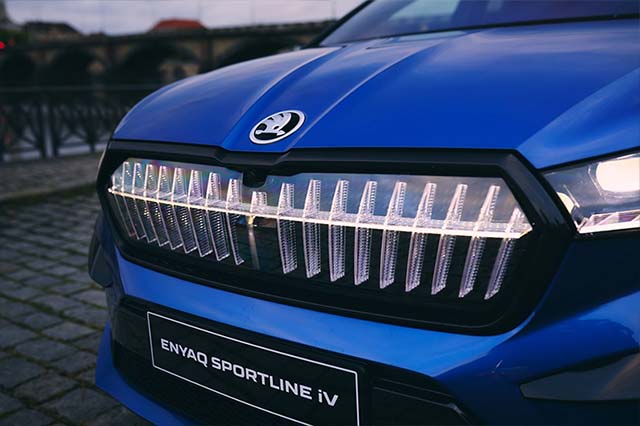 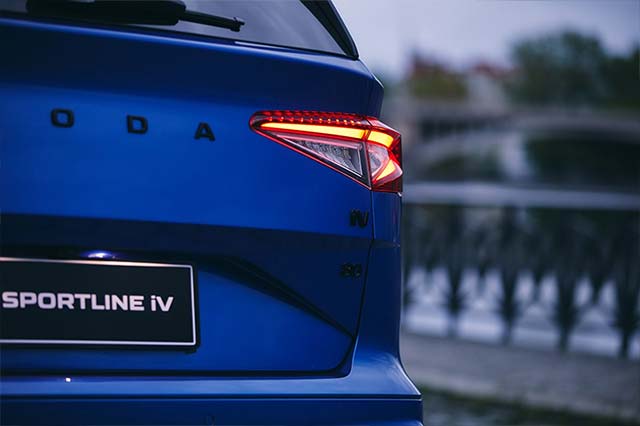 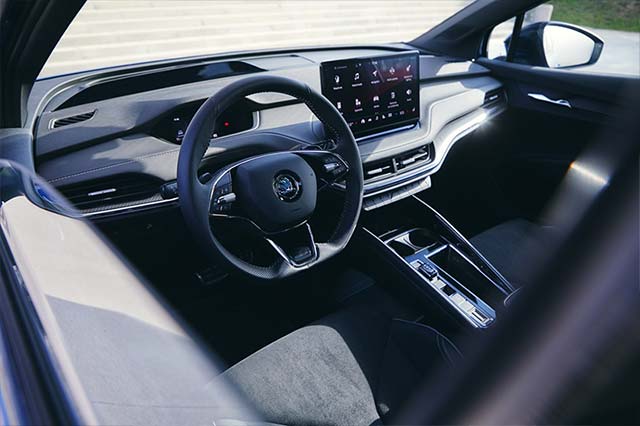 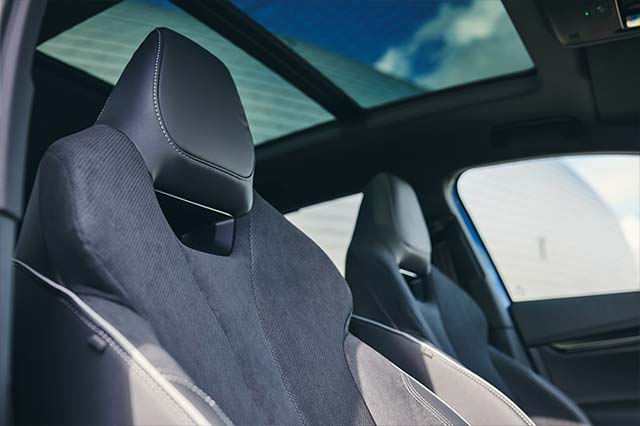 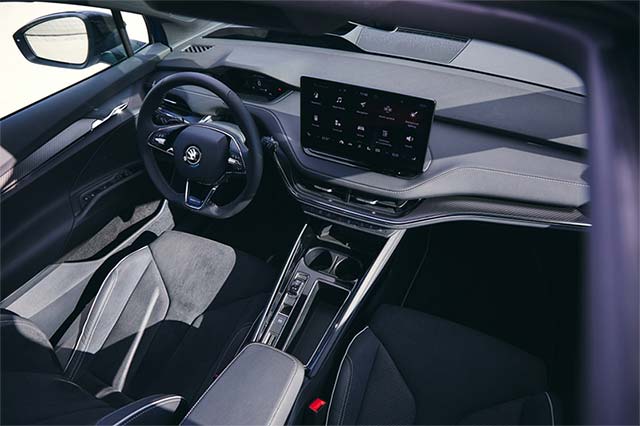 The Skoda Enyaq Sportline iV is the sportiest version yet of the new, all-electric SUV from Mladá Boleslav. Its look is characterised by a range of black design features and large wheels, while the lowered sports chassis makes for a particularly dynamic driving experience. The interior adds to the sporty feel, thanks to decorative, carbon-style trims, a three-spoke multifunction steering wheel and seats with integrated headrests. Skoda’s new flagship model range now includes a Sportline variant, offered in three performance levels. The Enyaq Sportline iV 60 has an output of 132 kW, while the Enyaq Sportline iV 80 produces 150 kW. Both feature rear-wheel drive. The all-wheel-drive Enyaq Sportline iV 80x is equipped with two electric motors generating a combined output of 195 kW.

The Sportline variants are an integral part of Skoda’s model portfolio. The Czech car manufacturer is continuing with this tradition by adding the Enyaq Sportline iV to the line-up of its first all-electric SUV. The new variant comes with a sports chassis as standard that features model-specific springs and shock absorbers, and has been lowered by 15 mm at the front and 10 mm at the rear. Body-coloured bumpers and side sills further enhance the car’s sporty appearance. Whether fitted with rear- or all-wheel drive, the electric SUV boasts excellent traction, confidently transmitting the power generated by the electric drive system to the road in any situation. Because of how electric motors work, the car’s maximum torque is available immediately, even when pulling away.

Furthermore, the high-voltage battery fitted in the floor between the axles ensures a low centre of gravity, which has a positive effect on the vehicle’s agility and behaviour when cornering. Thanks to its model-specific sports chassis, the Enyaq Sportline iV can handle fast corners more dynamically and with less roll. The progressive steering, another standard feature, also allows for sportier handling.

The optional head-up display complements the Digital Cockpit’s standard 5.3-inch screen, making the Enyaq iV the first Skoda to offer augmented reality. Higher up on the windscreen – in close range and immediate view of the driver – is a projection zone. Here, larger symbols such as directional arrows from the navigation system are displayed and virtually projected onto the road ahead. The ignition is switched on by simply pressing the start button or applying the brakes, thanks to the KESSY keyless vehicle entry system. When leaving the vehicle, the ignition switches off automatically.

Skoda’s first all-electric SUV is one of the safest vehicles in its segment. In the Euro NCAP tests, it was given the highest-possible rating of five stars. The Enyaq Sportline iV can be equipped with any of the state-of-the-art assistance systems Skoda has to offer. Front Assist with Predictive Pedestrian and Cyclist Protection, and Side Assist with Rear Traffic Alert warn of collisions with other vehicles, cyclists, pedestrians and static obstacles. Front Assist can prevent an accident completely or at least minimise its consequences. New assistance systems also increase safety: In the event of an impending collision with a pedestrian, cyclist or other vehicle, for example, Collision Avoidance Assist supports the driver by intervening in the steering. The system enables a controlled evasive manoeuvre to prevent the accident from occurring. When turning left at junctions, Turn Assist detects oncoming traffic at an early stage, warns the driver and automatically brings the car to a stop if necessary. When a door is opened, Exit Warning alerts the occupant if another vehicle or a cyclist approaches from behind. It does this acoustically and visually via a light signal on the inside of the wing mirror housing.