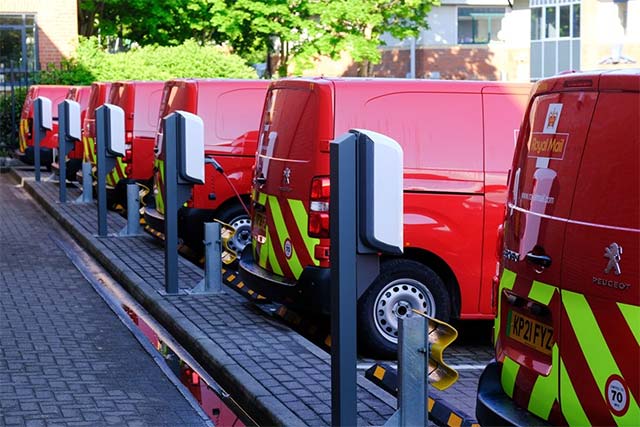 As part of Royal Mail’s continued drive to reduce emissions associated with its operations, the company has converted the last-mile fleet of a Bristol Delivery Office to be 100% electric.

The Bristol East Central Delivery Office, located in the City’s Easton area, has had its 23 diesel delivery and collection vans replaced by fully electric equivalents – comprising the Office’s entire collection and delivery fleet. Six electric charging posts have also been installed on the site as part of the transformation. The electricity for powering the office and for charging the vehicles is from 100% renewable sources.

Bristol was selected due to the City’s plans for a Clean Air Zone (CAZ), which will require certain vehicles to pay a daily charge to enter its centre. At present, other Delivery Offices across the UK are being considered for similar fleet makeovers in coming months – particularly those in places with existing CAZs, or that have plans to introduce them.

The fully electric vans have a significantly (up to 60%) larger load space than the vehicles they have replaced, giving them additional capacity to deal with growing parcel volumes. With lower maintenance requirements, the electric fleet promises more on-road time and higher levels of reliability.

The 23 new vans can travel up to 125 miles in between charges, depending on weather and load size. As part of Royal Mail’s recent expansion of telemetry technology across its fleet, the vans will also have telemetry capabilities installed, aimed at encouraging more efficient driving techniques.

The above benefits are in addition to helping the area’s approximately 60 postmen and postwomen deliver letters and parcels safely and efficiently, while producing fewer emissions.

With the UK’s largest “Feet on the Street” network of over 85,000 postmen and women, Royal Mail already has the lowest reported CO2e emissions per parcel amongst major UK delivery companies.

The expansion of alternative fuel vehicles demonstrates the company’s commitment to reducing emissions associated with its operations, and to delivering a cleaner future.

Jun 3, 2021Blagojce Krivevski
Britishvolt teams up with North East’s leading Universities to explore R&D and education collaborationsTest drive a new electric MG in June and get £750 off