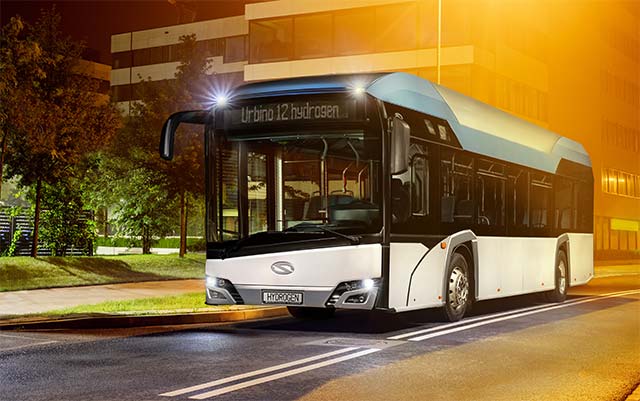 With state-of-the-art technology that enables fully zero-emission bus transport, hydrogen buses of Solaris are conquering the European market. Yet another carrier has opted for Urbino 12 hydrogen buses. This time, 13 hydrogen vehicles will go all the way to Frankfurt. The buses are to be deployed on target routes in 2022.

Solaris Bus & Coach has won a tender call for the delivery of 13 hydrogen-powered buses. This call was made by the company In-der-City-Bus which is in charge of public transport in Frankfurt. The contract marks yet another success for the manufacturer which has been gradually expanding its reach in the electromobility segment, supplying hydrogen buses, electric buses and trolleybuses to a growing number of European cities.

“Cities are responsible for 60% of CO2 emissions, so it is extremely important to allow the technologies used in every aspect of the city’s operation to “turn green” – including public transport. We are proud that the products offered by us contribute to this green transformation and that they have a tangible impact on improving the quality of life of city residents. I am very pleased to notice the growing interest in hydrogen buses which are a perfect supplement of our e-mobility portfolio,” remarks Javier Calleja, CEO of Solaris Bus & Coach sp. z o.o.

The technology used in the Urbino hydrogen makes for absolutely environmentally friendly transport, thanks to the use of energy supplied by a fuel cell (of 70 kW); the sole by-products of the chemical reaction that takes place in it are heat and steam. Electric power generated in the process of reverse electrolysis is transferred directly to the driveline, consisting of an axle with electric motors. What is more, each bus will be fitted with an additional electric power storage facility, i.e. a Solaris High Power battery. The hydrogen needed to propel the bus will be stored in gaseous form, in roof-stacked tanks.

The Solaris Urbino 12 hydrogen buses will be fitted with a range of top-notch Advanced Driver Assistance System (ADAS) solutions that support the driver’s work, including the MirrorEye system in which cameras replace conventional side mirrors thus improving road visibility for the driver. The camera view is transmitted to the in-vehicle displays. Interestingly, the screens can also show distance indicator lines for various parts of the bus, for instance its rear, particular doors or the axles, which will make it easier, and above all safer, for the driver to manoeuvre and to park.

Hydrogen buses are not merely a tale of the future; the first Urbino hydrogen models are already cruising on European streets, and dozens more of these buses have been already ordered by carriers in Germany, Italy, Austria and the Netherlands. According to market projections, by 2030 hydrogen-propelled buses will constitute a substantial part of the bus fleet in Europe.