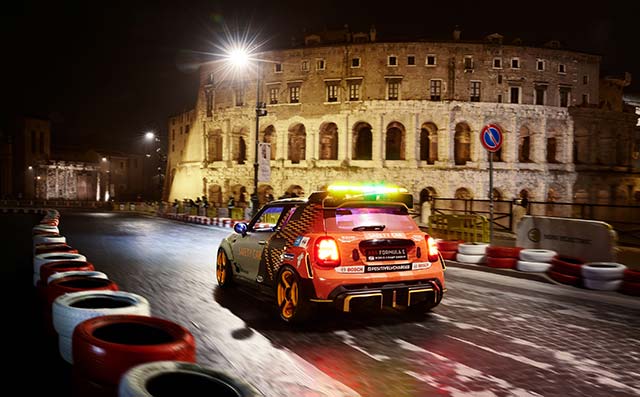 The MINI Electric Pacesetter, inspired by John Cooper Works, will officially appear on the track as the official Safety Car for the 2021 season in the second stage of the Formula E championship, scheduled in Rome this weekend.

At the wheel will be Bruno Correia, born in 1977, who, since 2014, has been the official driver of the FIA Formula E Safety Car.

Prior to hitting the track as the new Safety Car of Formula E, the MNI Electric Pacesetter has competed in another unique challenge – racing another powerful electric vehicle in the city – an electric Milan Metro subway train. An exciting competition is told in an adrenaline-pumping clip, between two vehicles completely different from each other but united by a single great characteristic: both are electric. Who reaches the finish line first? Watch to find out!

Behind the wheel of the MINI Electric Pacesetter is Charlie Cooper, a member of the founding family of John Cooper Works and grandson of John Cooper. On the Milan Metro subway train, is official Safety Car driver Bruno Correia. In a mix of adrenaline and fun through the magical atmosphere of the Eternal City, the two powerful electric vehicles race toward their destination.

On one hand, the Milan Metro subway train, with its unmistakable sound and speed on the rails, hosts Bruno Correia, away from the steering wheel and intent on encouraging the Metro driver. On the other hand, the road – closed to traffic for the occasion, becoming a real circuit – is where Charlie Cooper moves with the quick, electric reflexes of the MINI Electric Pacesetter.