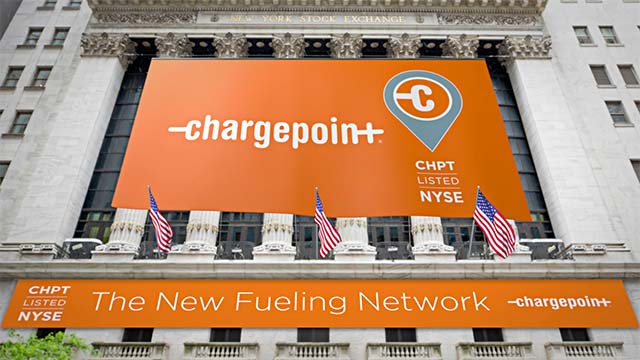 Shares of common stock and warrants of the new combined company will be traded under the ticker symbol “CHPT” (NYSE:CHPT) and “CHPT.WS” respectively.

“ChargePoint continues to pioneer the category, becoming the first publicly traded electric vehicle charging company operating across continents,” said Pasquale Romano, President and CEO, ChargePoint. “ChargePoint’s public company debut reinforces the durability of this industry, supported by increasingly progressive climate policy, market preference for clean mobility and more new vehicle introductions than ever before. With our business model tested over more than a decade and approximately $480 million in net proceeds raised from this transaction, I’m confident that ChargePoint is well positioned for continued growth in North America and Europe as the shift to electrified mobility takes hold globally.”

At the close of the transaction, ChargePoint had approximately $615 million in cash (prior to payment of its outstanding term loan), which it anticipates will fund ongoing operations and to support the expansion of the Company’s commercial, fleet and residential businesses in North America and Europe.