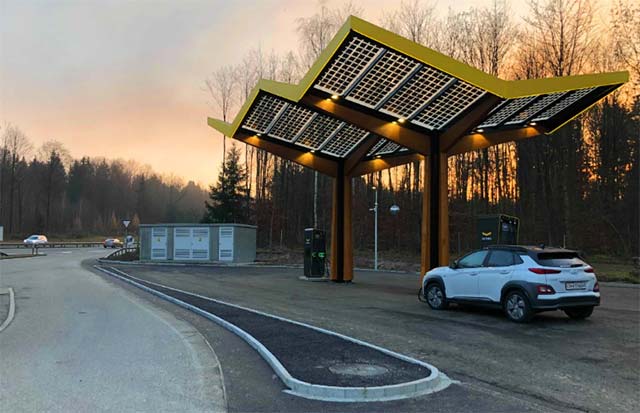 Fastned, the European fast charging network for electric vehicles, has opened its first fast charging station in Switzerland close to Zurich, along the A1 motorway.

The station is the first of 20 locations along key routes that Fastned won in a tender organised by the Swiss Federal Roads Office (FEDRO) in 2019. With a fifth country added to its network, Fastned makes another important step towards its goal of a European fast charging network, giving freedom to electric drivers to go anywhere.

Fastned specializes in the construction and operation of large fast charging stations at locations along motorways and in cities, designed to create significant capacity to charge up to hundreds of cars per location per day. At the stations, electric cars can be charged quickly with 100% renewable electricity. Fastned is listed on Euronext Amsterdam.

Fastned has been delivering a consistently high uptime at its charging stations, guaranteeing a high quality and reliable charging experience. The stations are unmanned, open 24/7, run on Fastned’s own proprietary software platform and are supported through the Network Operations Centre which is headquartered in Amsterdam.

The station opened today marks the first of 20 locations to be realised by Fastned as a result of the award of tender by FEDRO in March 2019. More stations will follow in 2021, with the next one planned to be opened in January. The FEDRO tender was initiated to support the realisation of high quality charging infrastructure along main routes in Switzerland, offering crucial infrastructure to the rapidly growing number of electric vehicles in the country. In the first 10 months of 2020 already 6.8% of new cars sold in Switzerland was fully electric.

Fastned’s first station in Switzerland is situated on the rest area Suhr, along the A1 St. Margrethen–Geneva motorway, that crosses Switzerland from East to West. The fast charging station features Fastned’s yellow canopy with a solar roof, and offers 300kW fast charging for up to four cars simultaneously, delivering up to 300kms of range per car in 15 minutes. This is up to 100 times faster than charging at home.

Charging at Fastned in Switzerland will cost 0.59 CHF per kilowatt-hour including VAT. Electric drivers will be able to pay with a multitude of payment options including credit cards, debit cards, EV charging cards and the Fastned app.

There are over six million motor vehicles in Switzerland. In 2020 6.8% of newly sold cars in the country was fully electric. In 2018, the Swiss government announced that it wanted to increase the share of electric vehicles as a percentage of all cars sold to 15% by 2022.