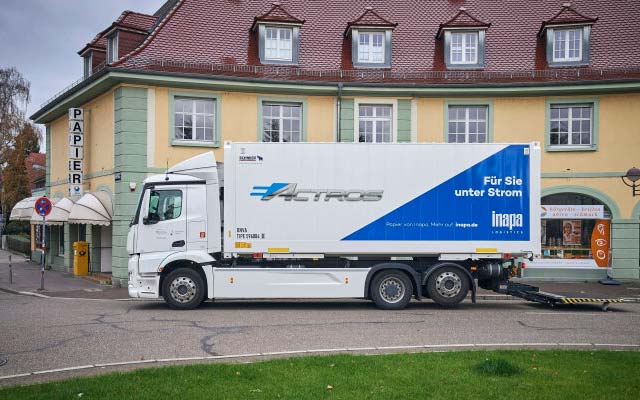 Another practical test of the battery-electric Mercedes-Benz eActros is starting at the company Inapa Deutschland in Ettlingen. This leading paper wholesaler is to use the heavy-duty electric truck for the distribution of paper packed on pallets to printers in the Karlsruhe area. The vehicle has a range of approximately 200 kilometers and will cover a distance of between 150 and 200 kilometers each day. Its batteries will then be recharged overnight at Inapa’s depot in Ettlingen.

Since 2020, the eActros has been in the second phase of its practical testing as part of the so-called “innovation fleet”. One of the many findings gained during the practical tests is that the eActros’s range of about 200 kilometers has proven to be absolutely realistic – regardless of payload, route or topography. The eActros is in no way inferior to a conventional diesel truck in terms of availability and performance in urban traffic, on highways or overland routes.

The cooling system for the cargo, but also the air conditioning – both electrically operated – have been functioning without any limitation in both extreme heat and winter conditions. Drivers are very pleased with the continuous availability of torque across the entire speed range. They also report in particular on the quiet driving style and a pleasant, smooth driving experience. In addition, when driving with foresight, electrical energy can be recovered through recuperation, i.e. motor braking. It is then rarely necessary to use the brake pedal.

The eActros is based on the chassis of the Mercedes-Benz Actros. In addition, however, the vehicle’s architecture is completely geared to electric drive and has a high proportion of specific parts. Drive is provided by two electric motors close to the rear-axle wheel hubs with an output of 126 kW each and a maximum torque of 485 Nm each. This results in 11,000 Nm each after the transmission ratio, which is a performance equivalent to that of a conventional truck. Lithium-ion batteries with 240 kWh supply the energy for the eActros. Depending on the available charging power, the batteries can be fully charged within three hours (at 80 kW).

The series-production eActros will be significantly superior to the prototype in a number of respects, such as range, power and safety. The eActros will be launched as a two- and three-axle vehicle. Series production is scheduled to start in 2021 at the Wörth plant on the Rhine. In addition, Daimler Trucks will embed the vehicle in a holistic ecosystem that also includes consulting services relating to e-mobility. They include route analyses, checking for possible subsidies, support for operational fleet integration and the development of suitable charging-infrastructure solutions.