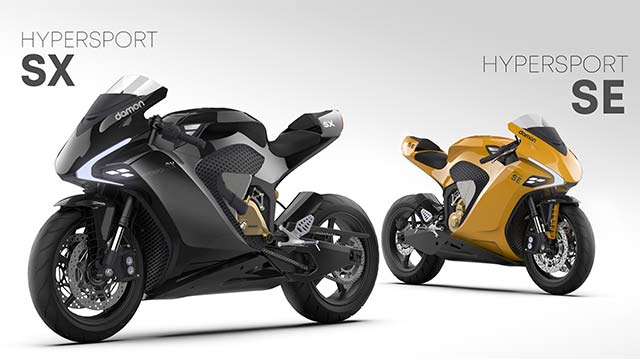 Vancouver-based Damon Motors released details of HyperDrive, the world’s first 100 percent electric, multi-variant powertrain platform that redefines motorcycle performance, safety and design. As a platform for future Damon motorcycles, HyperDrive is a monocoque-constructed, high-voltage powertrain that a wide range of models and submodels can be built upon.

In partnership with FreedomRoad Financial, Damon has also announced a revolutionary subscription plan offering for all HyperSport models. Customers can choose from 24, 36 and 48-month subscription plans with a guaranteed residual value, (conditions apply, with normal wear-and-tear) providing customers the freedom to exchange their HyperSport for updated models at the end of the term. As hardware gets updated, customers can always expect next-generation technology without the hassle and trade-in losses that occur with legacy dealerships and brands.

“As we at Damon continue to reinvent two-wheel mobility, HyperDrive lies at the heart of our innovation,” said Jay Giraud, founder & CEO at Damon Motors. “HyperDrive serves as the nucleus of our creations and will allow us to further evolve our technology and continue to introduce the world’s most exciting and groundbreaking electric motorcycles.”

“Damon continues to electrify the entire motorcycle industry with unprecedented features and next-generation technology that sets it apart from the competition,” said Rob Enderle, principal analyst at Enderle Group. “The Damon team has set a new standard in modern motorcycling with its ongoing commitment to maximizing all aspects of its motorcycles from the ground-up to deliver an unparalleled riding experience.”

HyperDrive is optimized for maximum performance, design and safety.

Design – Battery as a structural element

Damon’s HyperDrive includes the most energy-dense pack in transportation at over 200Wh/kg, but that has not stopped Damon from pursuing every opportunity to increase range and performance.

“Motorcyclists love to see motorcycles as visual diagrams of how they work,” said Dom Kwong, CTO at Damon Motors. “We aimed to emphasize this in a modern electric powertrain for the first time. The structural aspects of HyperDrive celebrate the optimization of mechanical design and performance as its central design expression.”

As well-meaning as they are, no amount of awareness campaigns, compulsory riding lights, or neon vests have significantly reduced motorcycle accidents. Damon believes the only way to bring about a paradigm shift in motorcycle safety is through the use of disruptive technology.

“We’re on a mission to radically improve motorcycle safety,” said Jeff Sand, design director at Damon Motors. “Our core values permeate the vehicle’s design and the systems in them. From passive thermal propagation resistance in our battery packs, to redundancy in critical drive systems, to our novel CoPilot 360º collision warning system, our aim is to invent the future of motorcycle safety and performance.”