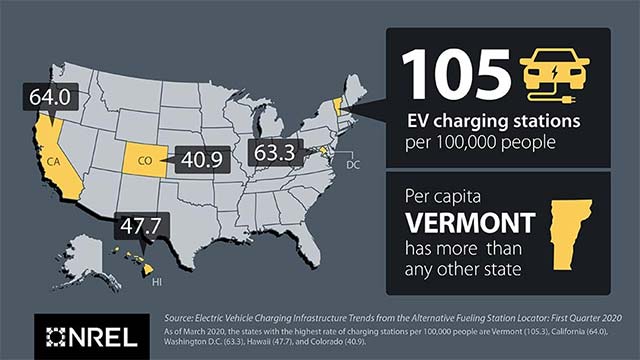 As electric vehicles have increased in popularity over the past few years, the infrastructure to charge them has similarly expanded along interstate highways, at workplaces, and at public parking lots across the country. But just how fast are charging stations being installed? And where, exactly, is charging infrastructure growing the fastest?

A new report from the National Renewable Energy Laboratory (NREL) answers these questions—and others—with a snapshot of the rapidly changing landscape for EV charging during the first three months of 2020. During that time, public electric vehicle supply equipment (EVSE)—an industry term for individual outlets at a charging station—grew 7.6%. Of that, direct-current fast chargers, which enable rapid battery charging, made up the largest piece of the pie, expanding by 10.6%.

These metrics build on a consistent upward trend across the country for charging stations, according to Abby Brown, a project manager in NREL’s Sustainable Transportation Integration group and co-author of the report.

“Since about 2011, we’ve seen strong year-over-year growth in charging infrastructure,” she said. “Between December of 2015 and 2019 alone, for example, the number of charging stations doubled. It was much the same in early 2020: more growth in all parts of the country.”

While all regions saw substantial growth during the quarter, a few stood out. The northeast—including Maine, New Hampshire, Vermont, New York, Massachusetts, Rhode Island, and Connecticut—saw an increase of over 10%, the fastest growth in the country. California’s charging infrastructure grew by 9%, even as it continued to boast the largest share of the country’s public charging infrastructure.

Brown said the report’s detailed statistics use data from the Alternative Fueling Station Locator, the most widely used tool on the U.S. Department of Energy’s Alternative Fuels Data Center.

“I can’t emphasize enough the value of the Station Locator in enabling such analysis,” Brown said. “It’s a robust data set made possible because of stakeholder groups—including EV charging companies and Clean Cities coalitions—who consistently report what’s happening on the ground in the communities they serve.”

For years, the Station Locator has mapped public and private non-residential alternative fueling stations in the United States and Canada, including ethanol (E85), biodiesel, natural gas, EV charging, hydrogen, and propane stations. The accessibility and functionality of the tool—which includes a free mobile app—appeals to a wide range of users looking to fuel or charge their vehicles.

Check out some other high-level trends from the report:

– Private EVSE—such as charging for transit fleets or employees only—grew by 3.2%, bringing the total of private EVSE to nearly 14,000

– Direct-current fast and Level 2 EVSE are 49.6% and 12%, respectively, of the way toward meeting projected 2030 charging demand for 15 million EVs (though 56.2% of public direct-current fast chargers are only available to Tesla drivers)

– ChargePoint made up nearly 44% of public EVSE in the station locator, the largest of any charging network