Battery Production: How The Heart Of An Plug-in Hybrid Is Made 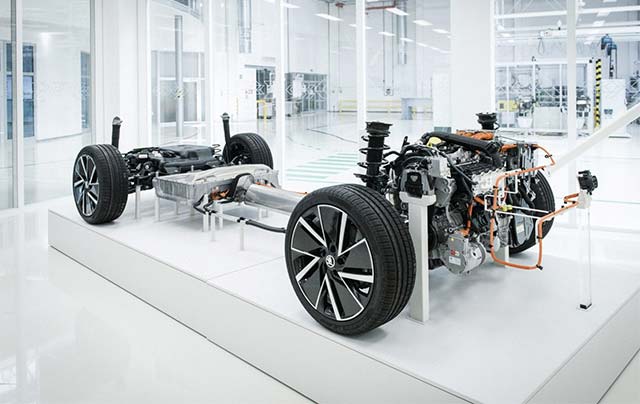 Take a look at how the batteries for SKODA’s plug-in hybrids are made. Why do the employees need special work clothes? What do they need an ordinary felt-tip pen for? And why do they weigh screws?

The production line delivers complete lithium-ion batteries for the plug-in hybrid models of the SKODA SUPERB iV and SKODA OCTAVIA iV. From there, the finished batteries also make their way into cars made by other Volkswagen group companies. The capacity of the state-of-the-art and highly automated production line is 180,000 batteries per year.

In the brightly lit, airy and spacious factory shed, the battery production line looks like a single, neat line at first sight. But it has three main branches, and the finished batteries come off it roughly in the middle. The battery modules are being put together into the assembly of four in one branch. In another branch there is the fully equipped case that houses the battery modules and is perfectly sealed at the end of the assembly process to protect the battery from external influences. The battery’s electronics are put together in the third, smaller branch. 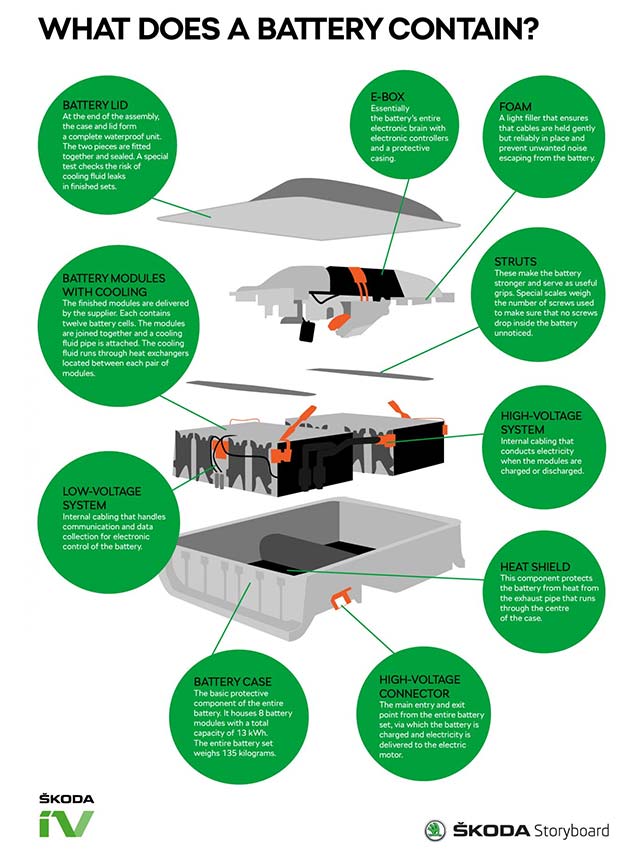 When assembling the four battery modules, SKODA uses modules from an external supplier that are actually finished small battery cells. These modules proceed along the first part of the line in two parallel streams: for the left and right parts of the battery separately. Each module comes from the supplier charged to roughly 20% capacity, so safety precautions are necessary right from the start of the production process. The first step is to fit the module with special heat-conducting foil that helps improve the cooling of the entire battery set. A cooler is inserted between the modules – once connected, coolant liquid flows through the cooler.

Other parts of the line handle the battery’s low-voltage electronics. The entire control module, known as the e-box, with its own control unit, is made on the part of the line with enhanced protection against any excess voltage from static. That is why everyone in the workplace wears special clothing. “Flooring, clothing and shoes that must be ESD-certified and must be regularly tested to check that they shield against static electricity are essential on the entire production line,” explains Otakar Mašek, a battery assembly specialist. The individual components on the line are also specially protected.

A single piece of aluminium

While the battery modules and e-boxes are being assembled, in another part the aluminium can forming the body of the battery is prepared. Most of the handling work here is done by robots, but at some stations they have a manual backup in case the robot is unable to do the job for some reason.

The massive aluminium case also comes from a supplier. Here on the line it is fitted with all the necessary components such as various connectors, seals, stops and screw bushes, but also the external heat shield that passes through the centre of the case. This shield protects the entire battery from the heat from the exhaust that runs beneath it. 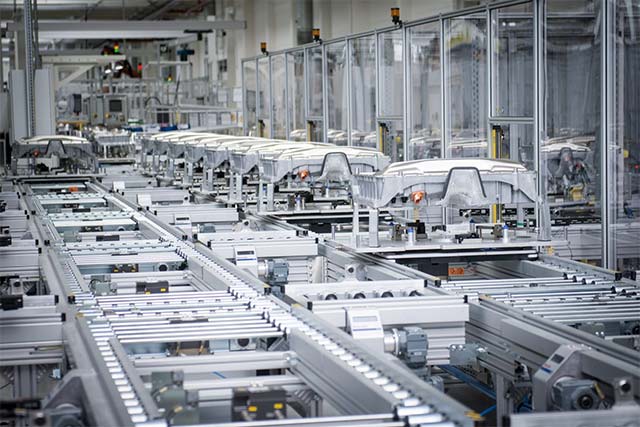 When the case is fully assembled, it is the turn of a perhaps unexpected assistant to do its bit: a robot that uses a vacuum cleaner to make sure that the case is free from any impurities that might cause problems during operation. After being vacuumed, the case is ready for what is known as the “marriage”. While in automobile manufacture this has traditionally meant the phase when the body is joined together with the chassis and engine, here it means putting the assembled battery modules into the case, which is done by a robot. Another robot takes care of the fairly complicated process of screwing bath and module together. The seal lies on a mount. The complexity lies in the fact that the screw and the mount are automatically connected first.

Once the case and modules have been put together, other components are fitted, primarily the cooling circuit. The installation of the low-voltage cabling is completed and the case is given filler material and support braces. One smart solution is applied when these are screwed together on the line. “The screws for attaching braces are on a special trolley with scales, which can tell whether the worker used the right number of screws and didn’t take one more that fell into the case, for example,” says Otakar Mašek. 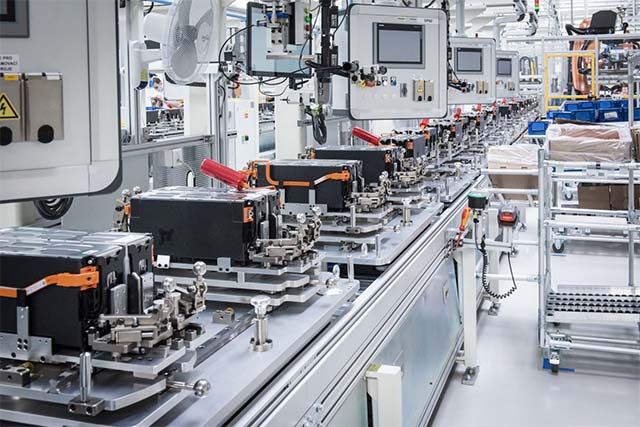 At the start of assembly battery modules are paired up; the complete battery blocks are made from multiples of these pairs

Another control practice might seem unexpected as well: after all the connectors have been attached inside the battery, the employee at the next station uses a felt-tip pen to make a dot on the place of the given connection to show that he performed a second visual check of the connection. “This requirement forces the employee to actually look at the connection,” Mašek says. All that’s left to do after that is to connect the module to the control unit, and the battery is ready to be sealed. The lid on the case is secured with a double seal: rubber and a special glue. The lid is screwed on by a robot.

Assembly is followed by a series of tests. The first is the seal test, with separate checks of the tightness of the cooling circuit and the battery as a whole. From time to time, a different-looking unit appears among the tested batteries. This is a specimen unit that verifies that the seal testing apparatus is working properly. Special jets can simulate seal defects, which adds another dimension to the check of testing apparatus’s functionality. 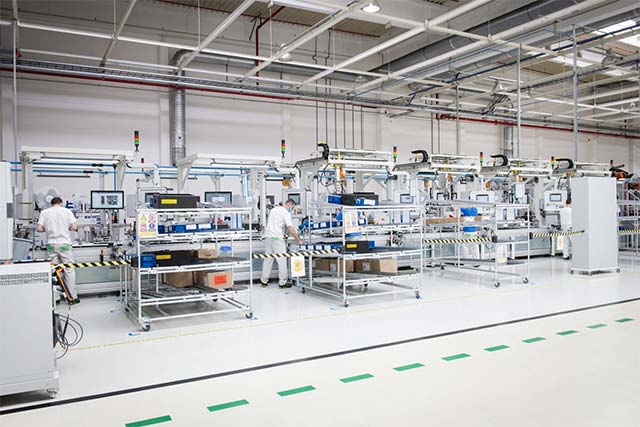 When the battery has passed the seal test, it can proceed to one of the thirteen test states for a series of electric tests. High-voltage and low-voltage (communication) parts are checked, and tests are done to make sure the insulation works properly. Once the battery has been through all the tests, it is charged to around 37% capacity. Then it is given a warning label, its own type label for identification purposes (this label is also printed and affixed automatically under the watchful eye of a camera) and a few other details. Then the finished battery is dispatched to the warehouse. 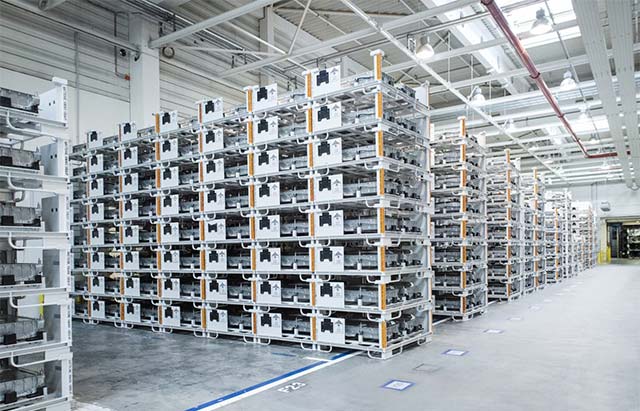 Warehouse of finished batteries. It is constantly watched by thermal cameras that detect any risk of fire