The holiday trend in 2020: touring through Switzerland with zero local emissions in the MINI Cooper SE 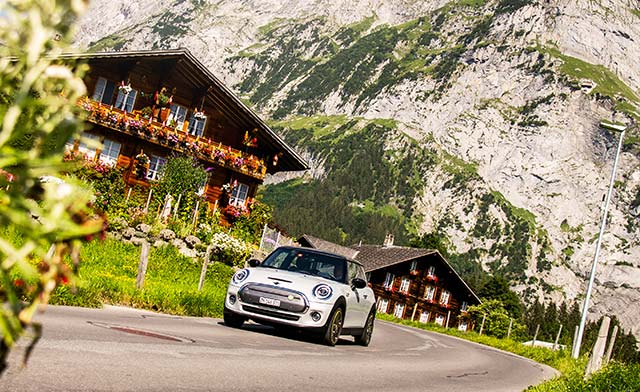 Short awayday trips instead of travelling to far-flung places, babbling brooks and lakes rather than the sound of the sea – holidays in the summer of 2020 are very different to the vacations many people have been accustomed to in the past. This doesn’t necessarily have to be a disadvantage. The current travel restrictions are expanding our horizons for new vistas close to home. And there is undoubtedly a rich array of sights well worth seeing in a country like Switzerland, which attracts tourists from all over the world in “normal” times. And for good measure, a tour of discovery exploring nearby regions also has a significantly better environmental footprint than air travel. The outcome is particularly favourable in the new MINI Cooper SE . The car is transforming the virtually silent and zero local emission exploration of Switzerland’s mountain and lake landscape into the holiday trend of the year.

In Switzerland, even residents of big cities do not have to travel very far in order to rest and relax in the midst of truly impressive natural surroundings. Outings between low-lying countryside and high mountain regions are therefore easily achievable with the MINI Cooper SE. After all, the range of this car with a fully charged battery extends to between 235 and 270 kilometres depending on the selected driving style. Schaffhausen, not far from the German border, is an ideal starting point. A message inscribed on the historic Swabian Gate exhorts people to be careful on the streets with the slogan “Lappi tue d’Augen uf” or “Fool, keep your eyes peeled”. The MINI Cooper SE signals its presence to pedestrians and cyclists in a significantly more friendly style. An artificial drive sound created especially for the MINI is transmitted to the outside world through speakers when it is driving slowly. It heralds the approach of the electric car that would otherwise be virtually silent.

The neighbouring village of Neuhausen is located near the famous Rhine Fall. Visitors are taken for a close-up view of the roaring waterfalls in flat-bottomed boats where they can marvel at the power of the cascading waters. The MINI Electric uses its energy of motion for regeneration of electricity in the acceleration and deceleration phases. A toggle switch allows this recuperation to be adjusted in two stages. In power mode, the car can navigate its way through city traffic almost without touching the brake pedal. On the other hand, when coming down a mountain, the braking effect can be used to replenish the battery reserves at the same time.

Conversely, reduced recuperation provides more comfort for the trip of some 50 kilometres to Zurich and also for the subsequent stages on the route to the Swiss mountains. Anybody leaving Switzerland’s biggest city across the Europe Bridge travelling in a southerly direction will soon be able to enjoy the panorama of Lake Zurich. When you are driving in GREEN mode activating an accelerator response based on efficiency, congestion and traffic lights are quickly forgotten. However, selection of the SPORT setting from the MINI Driving Modes is recommended in the Sihlwald forest nature reserve. The toggle switch activates more direct responses for steering and accelerator. The agile handling of the MINI Cooper SE is particularly effective on the winding stretch of road along the River Sihl. Alongside the electric motor generating 135 kW/184 hp, the front-wheel drive and the chassis tuned to each specific model and actuator-operated wheel-slip limiter, the position of the high-voltage battery also contributes to the driving fun typical of the brand. The T-shaped battery is configured low down in the central tunnel and in the subfloor. This reduces the centre of gravity for the first all-electric MINI. Another effect of this location is that the storage volume of between 211 and 731 litres provides exactly the same space as the conventionally powered versions of the MINI 3-door.

The roads along the banks of Lake Zug offer an opportunity for an initial break and an unrestricted view of the watery expanse on the eastern and the southerly shores. Then comes Lake Lucerne after a short sprint in a south-westerly direction. This is when the panorama is undoubtedly dominated by the undulations of the Alpine foothills. The road to Lucerne takes the MINI Cooper SE past the Swiss Transport Museum, which in itself is well worth a day’s excursion. The museum presents a collection of aircraft, railway locomotives, ships and automobiles from various eras in a number of exhibitions designed to be exciting for young visitors and adults alike. Perhaps a place will be reserved one day for the MINI Cooper SE among these milestones defining the history of mobility? After all, it is the first premium electric automobile in the small car segment.

Lucerne’s biggest attraction is the Chapel Bridge on the western bank of the lake. This is a city landmark and it has the reputation of being the oldest covered wooden pedestrian bridge in Europe. The route for the onward journey then only continues in two directions: towards the south or up a mountain. Depending on the available time and the mood, the driver has a choice of two options for a substantial section of the next leg. You can travel down the motorway or take the country route alongside Lake Sarnen and a little later beside Lake Lungern.

Anyone keeping an eye on the external temperature display will soon recognise what makes a trip into the mountains during the summer so relaxing: the mild climate. For every 100 metres climbed by the MINI Cooper SE into the mountains, the temperature falls by an average of half a degree centigrade. But this is no reason to switch off the air-conditioning, particularly since the standard heat-pump technology works exceptionally efficiently and therefore only uses a small amount of energy from the high-voltage battery. On the way to Interlaken, the shimmering turquoise waters of Lake Brienz present an attractive proposition for bathing in one of the four lakeside lidos. After a refreshing dip, the final spurt is a fun ride through Interlaken and up the mountain to Grindelwald.

Grindelwald is a traditional tourist destination at the foot of the north face of the Eiger and home to a string of successful elite downhill skiers. This is a perfect starting point for trips to mountain peaks, grottos and glaciers. Just as it did one hundred years ago, the Jungfrau Railway passes through a tunnel seven kilometres long until it pulls into Europe’s highest railway station perched at an altitude of 3,454 metres above sea level. After arriving at the Jungfraujoch, visitors can experience a spectacular Alpine wonderland of ice, snow and rocks. A breathtaking view of the Eiger north face awaits trippers on the Grindelwald First summit. Adventurers then take the “First Flieger” cable car down for 800 metres. And the Pfingstegg summer toboggan run also races downhill to the valley. Anybody looking to explore the spectacular natural environment in peace and quiet is recommended to go on a hike through the Rosenlaui Glacier Gorge.

In the meantime, the MINI Electric can be plugged into a household socket, wallbox or quick charging station and recharge its battery. The current level of charge for the high-voltage battery can easily be checked anywhere using the MINI Connected remote app. Drivers can also use the timer on their smartphone to select the desired departure time so that the stationary air-conditioning achieves a comfortable temperature inside the vehicle at the right time. This means that the MINI Cooper SE, the driver and the passengers have ideal conditions for the return trip to Zurich – or alternatively for another stage of the journey with zero local emissions through Switzerland’s most beautiful holiday regions.