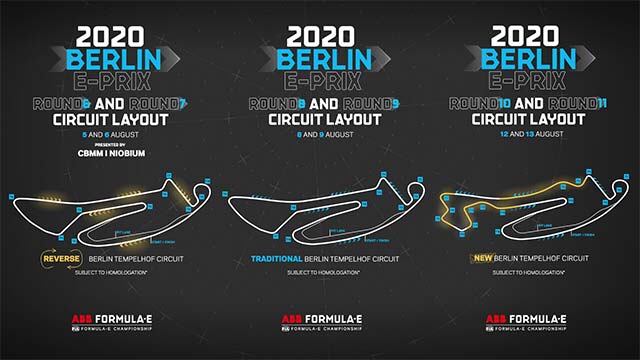 Formula E will resume racing on August 5 in Belin, with six races in nine days across three circuit layouts set to decide who will win the 2019/20 ABB FIA Formula E Championship in the most intense season finale in motorsport history.

Teams and drivers had been kept in the dark until now as to just how the trio of double-headers would look, with series organisers lifting the lid on the track configurations to be used at Tempelhof Airport in two weeks’ time.

Each pair of races will be run a different layout, presenting opportunities for distinct strategies and providing the perfect conditions to feed Formula E’s inherently unpredictable, exciting all-electric street racing.

Rounds six and seven will see a first for an international circuit racing championship, with the Tempelhof circuit to be run clockwise, in reverse.

Formula E’s 24 drivers will then race around the familiar Tempelhof circuit – a fixture that first featured on the calendar in the championship’s inaugural 2014/15 season – in rounds eight and nine.

Adaptations will be made on the ground in the 24-hour period between the first and second pair of races with run-off, kerbs, barriers and broadcast placements all to be changed on the fly.

To close out the unprecedented showdown to season six, rounds 10 and 11 will take place on a third, more technical Berlin layout, featuring a tighter, twistier middle and final sector – another challenge entirely for teams, drivers and organisers alike.

“It is a huge undertaking in terms of production to set up three different configurations for this event, with fewer people on-site to be able to carry out those changes,” said Frederic Espinos, Formula E Sporting Director. “We’re doing something that has never been seen before in world-class motorsport and it’s an example of how reactive and innovative Formula E is – it’s in our DNA.

“Racing in both directions has a lot of implications. It is not just turning all braking markers and the grid boxes around. Other international series wanted to make this happen but their proposals were rejected by the governing body.

“We had to make sure all the broadcast technology, overlays, branding, safety measures, barriers, kerbs and run-off worked and plan accordingly for this – whilst also making the changes viable in just 24 hours, with reduced resources.

“The third track will be more technical, so totally different again in terms of energy management and what the teams might be used to or expecting.

“All along, we aimed to make their lives as tricky as possible in Berlin, limiting the effectiveness of their simulation work and throwing strategies up in the air. Car setups will all need to change, energy management and regen will be completely different and teams will have to think on their feet.

“There will be a lot for drivers and engineers to get on top of before we go green and I feel the Formula E spectacle fans are familiar with will be pushed a step further still with this additional bundle of unknowns.”

The ‘NILREB’ project to reverse the Tempelhof layout was in the pipeline prior to the global pandemic, with Formula E’s Sporting team always looking to spring a surprise on competitors and the fans watching on.

“The FIA and the German motor racing authorities have supported us constructively all the way, allowing our experienced team of track engineers to make this happen and we are grateful for their support and co-operation,” said Espinos.

“NILREB was in progress before the current situation. Our idea was to do one day clockwise, one day anticlockwise. We started to work on it at the turn of the year and set up a working group end of February.

“We were juggling some super good and cost-effective ideas. We were working on this idea prior to the current circumstances as we are always trying our hardest to surprise people and do something new and groundbreaking.”

Formula E and the FIA have been working in close consultation with teams and local authorities to define a robust plan to conclude the championship in a safe manner. To mitigate risk, Formula E is implementing strict safety measures including racing behind closed doors with only essential staff and competitors travelling to the event.

As per German government guidelines, there will be a maximum number of 1,000 people on site at any given time, including local suppliers and medical crews with each Formula E team bringing limited staff. All other operations will be carried out remotely.

Key health and safety protocol include mandatory coronavirus testing prior to the races, as well as on-site screening every day upon arrival at the track. Formula E will also actively enforce the use of face masks, social distancing and limit movement across workspaces with clearly defined zones for different event populations.