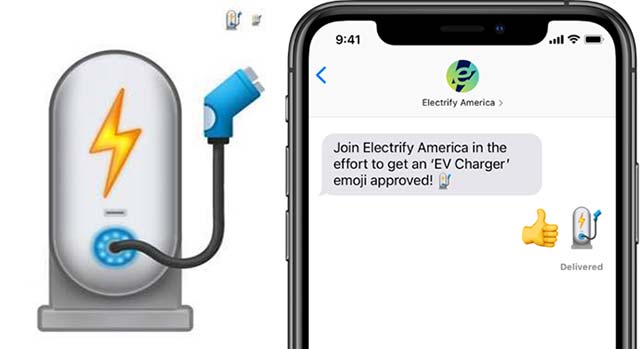 Ahead of World Emoji Day on July 17, Electrify America announced a new proposal to introduce the first-ever “EV Charger” emoji for smartphone keyboards. The proposal was officially submitted for consideration to the Unicode Consortium, the governing body for emoji creation.

Currently, the only emoji for vehicle fueling is a gas pump. With the continued growth of the EV marketplace and proliferation of EV charging stations, the emoji lexicon should be updated to accurately reflect current culture and include this common alternative mode of vehicle fueling. While some may be able to creatively interpret ‘electric vehicle charging’ from a gas pump emoji placed next to a lightning bolt emoji, the millions of drivers who rely on EVs know that this is not an appropriate substitute for the unique experience of charging an electric car.

“Emojis represent today’s emotions, feelings and activities, and when it comes to transportation, that should include electric vehicle culture,” said Rich Steinberg, director of marketing, communications and Green City initiatives at Electrify America. “Pushing for an emoji that reflects the experiences of EV drivers is part of Electrify America’s goal to increase EV awareness and adoption, and support the transition to a cleaner energy future – a shift that will have impact on Americans and people around the world.”

After offering an “Electric Vehicle with Charger” emoji on World Emoji Day 2019 and receiving a decline from the Unicode Consortium, the EV charging company felt strongly enough about accurately representing EV chargers and the future of transportation through emoji to create and submit a new design. The new “EV Charger” emoji design takes feedback from the committee into account, streamlining the emoji to focus on solely the charger.

– It’s estimated that by 2022, over 500 different EV models are expected to be available globally, and by 2040, over half of all passenger vehicles sold will be electric.

– As new models of electric vehicles come to market and more consumers adopt EVs, the charging industry is adapting – the global number of publicly accessible chargers increased by 60 percent in 2019, and it’s estimated that the U.S., China and Europe will install over 29 million EV charging stations by 2030.

To support the creation of the “EV Charger” emoji, consumers can express their excitement on social media using #EVmoji and visit Change.org to sign a petition.