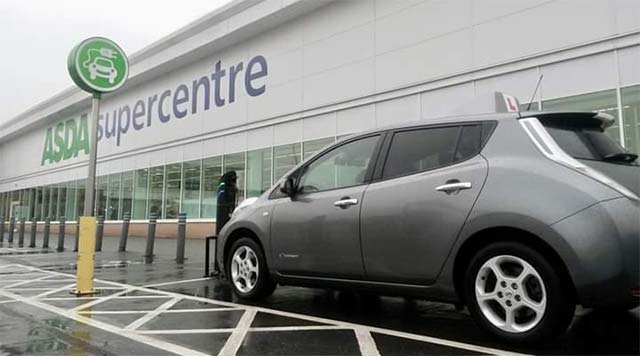 The number of EV charging points at supermarkets has doubled in the last two years, according to data analysed by Zap-Map and the RAC.

Some 542 EV charger units were installed by supermarkets from the end of October 2017 to the end of 2019, taking the total on their sites to 1,115 – a growth of 95%. This means 6.5% of all the UK’s public EV charging points are located at supermarkets with growth in-line with the overall growth of public charge points.

The number of stores offering charging facilities has also doubled with 608 supermarket sites now catering for battery electric and plug-in hybrid vehicles which equates to 5% of all supermarkets – while this appears low it is no doubt in part due to a considerable proportion of smaller supermarket sites not having car parks. Between 2017 and 2019, 313 stores added chargers with, on average, two charging units being installed per site.

The RAC and Zap-Map have both long advocated the importance of supermarkets offering customers charging facilities due to the fact that customers spend 45 minutes on average in their stores – a more than reasonable amount of time to top up an electric car. 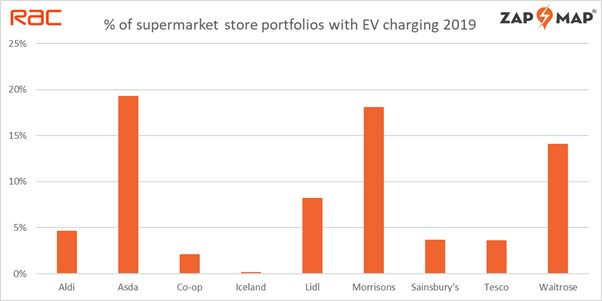 Asda and Morrisons have the greatest proportion of stores with charge points
From 2017 to 2019, the proportion of the UK’s 11,979 supermarkets which have EV charging facilities has increased from 3% to 5%. When looking at each supermarket’s store portfolios Asda has the greatest proportion of locations where an EV can be charged – 122 of its 633 sites (19%). Morrisons is in second spot with EV charging available at 89 of its 494 stores (18%), while Waitrose comes in third place with 14% – 49 of 349 stores.

While Tesco currently only has 4% of stores with charging capability, it has highest total number of stores with charging facilities (142 of 3,961 stores). It should also be pointed out that many supermarket chains particularly Tesco, Sainsbury’s, Iceland and Co-op have stores in city or town centre locations which do not have car parks, therefore skewing the ‘charge point by store’ percentage significantly. 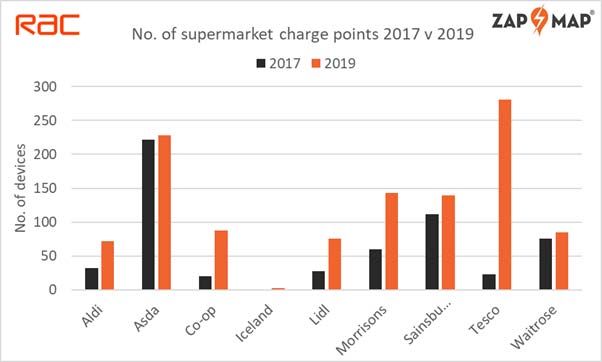 Morrisons, followed by Lidl dominate rapid charging at supermarkets
Currently, 15% of supermarket charge points are capable of faster charging known as ‘rapid charging’. Morrisons leads the way here with 84 rapid chargers, making for 59% of its total number of chargers. Lidl is second with 63% of its 76 units (48) equipped with rapid charging. Co-op is in third with 18% of 88 chargers (16) capable of delivering its EV-owning customers with a rapid charge. Asda and Tesco which dominate EV charging generally at supermarkets are lagging behind in the rapid stakes with one and two chargers respectively.