BYD Leads Sales of Electric Buses in Latin America with More Than 1,000 Units 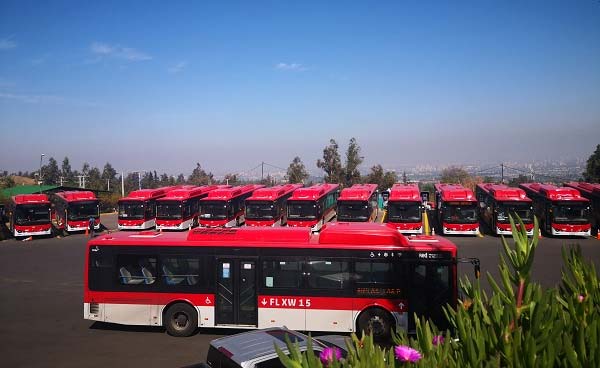 BYD has now sold more than one thousand electric buses in Latin America, becoming a leader in the promotion and implementation of electrified public transportation across the region.

With a total of 1,035 buses sold to date, the company covers 71% of the local pure electric bus market, cutting 222 tons of CO2 emissions – with an average daily operation of 200 km per bus – which is the equivalent to planting 18,520 trees.

Chile leads the ranking with 285 electric buses, the largest fleet on the continent. The operation of the first 100 BYD electric buses began on December 15, 2018, by Enel and Metbus. After one year, the fleet has traveled a total of 4.5 million kilometers since its deployment, serving more than 13 million users and made 160 thousand trips, saving 21 tons of CO2 emissions.

This experience has sought to be replicated in other parts of Latin America. Only in 2019, in the city of Guayaquil, Ecuador, rolled out its first fleet of 20 BYD electric buses; in Mendoza, Argentina, a fleet of 16 BYD buses was launched, while BYD also delivered 15 buses in Sao Paulo, Brazil. In Colombia, the company’s 64 electric buses began operations, with BYD also winning the tender for 379 electric buses, which will start operations in Bogotá’s public transit system next year.

While China maintains the leadership of the global market, Latin America has shown rapid growth in 2019. Current sales of electric buses in Latin American public transport reached 1,462 units at the end of 2019 and most of them involve BYD, with a 71% market share in the region. Of this total, 619 buses are already in operation (including pilot tests), with 71% of them being BYD-made.

How has Latin America responded to climate change?

Latin America is studying new regulations and commercial models that can facilitate the implementation of electric vehicles, driving the transition to cleaner and more sustainable forms of transport. Local governments have announced their commitments to electrify their public transport. Chile, for example, has announced the total electrification of its public transportation fleets by 2040. Colombia has published its National Electro Mobility Strategy, aimed at 600,000 electric vehicles by 2030, and Ecuador announced that all new vehicles incorporated into the public transport fleet should be electric from 2025.

According to the International Energy Agency, global transport emissions increased by only 0.6% in 2018 (compared to 1.6% annually in the last decade) due to improvements in efficiency, electrification and increased use of biofuels. The transport sector is responsible for approximately a quarter of global carbon emissions (24% of direct CO2 emissions come from the use of combustion vehicles). Road vehicles (cars, trucks, buses and two-and three-wheelers) account for almost three quarters of CO2 emissions from transport. Without aggressive and sustainable policies, carbon dioxide emissions could double by 2050, so it is necessary to establish a coherent system of incentives to drive the implementation of these policies and reduce emissions.

Dec 24, 2019Blagojce Krivevski
Rivian announces $1.3 billion funding round led by T. Rowe PriceVW to invest €19 billion for future technologies through 2024, of which €11 billion for e-mobility