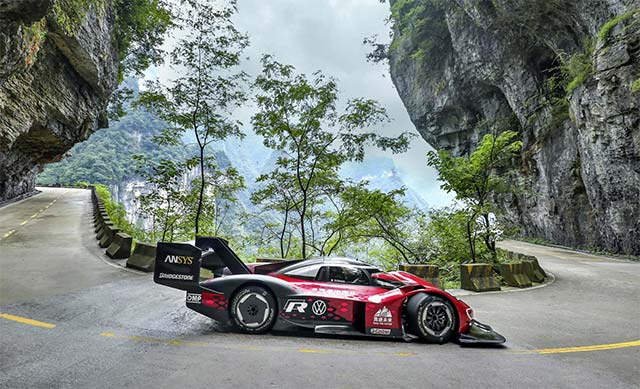 In a first, the all-electric Volkswagen ID. R has established a new record for the stunning Tianmen Mountain Big Gate Road, a 99-turn route that had never before been used as a performance car benchmark.

With a time of 7 minutes, 38.585 seconds, Volkswagen ID. R driver Romain Dumas demonstrated the power and precision of the ID. R on one of the world’s most scenic and technically challenging roads.

The ID.R currently holds the records on Pikes Peak (USA) and at the Goodwood Festival of Speed (GB), the electric lap record on the Nürburgring-Nordschleife (D), and now the fastest time for an ascent of Tianmen Mountain in China. The car is the motorsport ambassador for the new, fully-electric range of vehicles from Volkswagen, the ID. family, the ﬁrst of which – the ID.3 – is having its world premiere at the Frankfurt Motor Show.