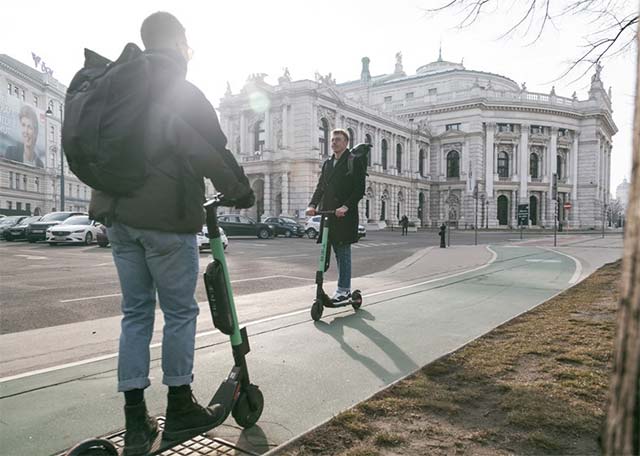 On its triumphal march through Europe, the e-scooter has now arrived in Germany. What consequences the electric pedal scooters have for mobility is illustrated by the example of Vienna.

If, in theory, you wanted to travel Europe on an electrically powered scooter, you’d have to keep adapting to the different legal regulations in each country:

– In Italy, e-scooters are allowed to drive at 6 km/h in pedestrian zones and 20 km/h on the carriageway, but they are prohibited from travelling at night and in heavy rain.

– In Spain, they are allowed to use cycle paths, bus lanes and carriageways at a maximum speed of 30 km/h; under-16s must wear a bicycle helmet.

– In Austria, electric scooters may have a maximum design speed of 25 km/h and must use cycle paths and carriageways only where there are no cycle paths.

– In Germany, e-scooters may be driven at speeds of up to 20 km/h; they may be used from the age of 14 on cycle paths and, where appropriate, on carriageways. Insurance is also obligatory

As variable as the legal regulations are, the electric scooter is still a success story worldwide. A dozen start-ups active in the sector have already raised more than $1.5 billion in funding, according to Boston Consulting Group. The management consultancy estimates the volume of the global market in 2025 will be 40 to 50 billion dollars.

In San Francisco the triumphal march of the e-scooter started in 2018. A number of start-ups brought their scooters in the city and made them available to hire via an app, but the enthusiasm of citizens and tourists for borrowing was as big as the intention to return them to their designated parking spot was small. And everyone quickly got annoyed by the fact that e-scooters were lying around everywhere – on roads, pavements and even in front gardens. The city reacted quickly, limited the number of providers and drew up rules.

Vienna limits the number of scooters

In Vienna, it was not the number of providers but the number of vehicles per provider that was limited, where e-scooters have been registered since the beginning of 2019. A maximum of 1500 scooters may be operated by one company, explains Petra Jens, Pedestrian Commissioner at the Mobilitätsagentur Wien (Vienna Mobility Agency). The agency is aimed at promoting cycling and walking and therefore also closely monitors the use of e-scooters.

In Austria’s capital, a total of six lessors now operate the rental of electric pedal scooters without parking stations. Providers Lime, Bird, Tier Mobility, Wind Mobility, Circ and Hive are often backed by big names: Lime is financed by Google, Hive by BMW and Daimler. Together, the six have registered over 7000 vehicles. ‘Nobody reckoned with the fact that so many suppliers would enter the market’, explains Petra Jens.

The city council regards e-scooters as a positive thing for the time being: ‘They save more space than a car and you can get around more quickly than walking’. e-scooters are equivalent to cycling. This means that from the age of 12, you can operate the scooters on your own. You must use the cycle paths or alternatively carriageways but only where there are no cycle paths.

What differentiates e-scooters from bicycles? E-scooters have lights but they are not equipped with the same amount of reflectors, they do not achieve the same brake deceleration as wheels and you cannot give hand signals to turn because you have to keep both hands on the handlebar. Does this lead to more accidents? ‘There will be accidents, as with all other vehicles. Whether the number of accidents will increase significantly as a result has not yet been proven’, says the Pedestrian Commissioner of the City of Vienna.

She is critical of the increasing strain on cycle paths. ‘The Vienna Mobility Agency is therefore calling for further expansion of the cycle infrastructure.

Although pavements are a no-go area for riding on e-scooters, they are often parked on them. As in San Francisco and also in Paris, this led to an outcry. ‘The scooters are not particularly stable when standing up and easily fall over. And they are often parked in such a way that they hinder pedestrians’, explains Petra Jens. ‘This leads, among other things, to problems with the tactile guidance system on the ground for the blind’.

The Vienna Mobility Agency also criticises the fact that ‘The life cycle of an electric scooter is on average two months’, after which the vehicles are repaired or scrapped immediately. ‘This is not a sustainable use of resources’, complains Petra Jens.

It is also questionable whether e-scooters will increase sustainability as part of the overall traffic mix. The average rental time in Vienna is ten minutes. Can we conclude from this that the scooters are mainly used on routes that would otherwise have been covered on foot? ‘There’s no evidence of that’, Petra Jens stresses. It is still to be ascertained which other forms of mobility e-scooters act as substitutes for. In any case, they themselves use a conventional form of mobility: every evening, some of the e-scooters are collected from the streets of Vienna by delivery van or truck and charged overnight.

The term micromobility covers electric scooters, e-bikes and electric pedal scooters. According to estimates by management consultants McKinsey, this market will generate sales of around 150 billion dollars in Europe by 2030, and as much as 500 billion dollars worldwide. More than a quarter of the world’s population live in cities with more than one million inhabitants and an average speed of 15 km/h. E-scooters could be of considerable significance here. And they are also interesting for suppliers, says McKinsey. With procurement costs of around 400 dollars per scooter, a provider could reach the profit zone after just over three months. The Hypermotion trade fair is also dedicated to this special area of mobility.

Discover Messe Frankfurt’s international portfolio of events for the automotive, transport and logistics industries. Approx. 25,000 exhibitors and 830,000 visitors are already taking advantage of more than 50 trade fairs, conferences and other events offered by Messe Frankfurt. You will find dates, pictures and insights for these events here.