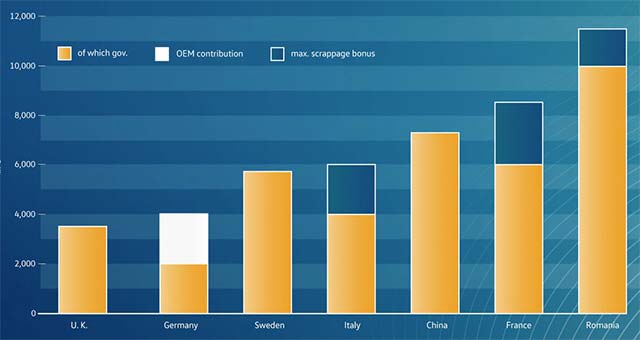 Many markets, one challenge: to convince motorists worldwide of the switch to sustainable, clean and quiet electric mobility. One thing is clear: Drivers who have been happily driving a petrol or diesel-powered vehicle since the memorable day of their driving test need more than just a little persuasion to give e-cars a chance.

The approaches to achieving this goal vary greatly from market to market: in regulatory, tax and financial incentives – or a combination of all three. These incentives are aimed at both private customers and drivers of company vehicles. After all, company cars account for the majority of new car sales in the important European markets, so that not only direct subsidies but also different taxation approaches play a role. Increasing the tax burden for vehicles with higher emissions while granting tax benefits to those with lower emissions is one approach. In other markets, incentives for private buyers to buy are more appropriate.

While cost savings in incentive payments are visible from day one, tax savings are usually only felt by customers after three to four years. New car buyers in Norway – the country with the highest sales penetration of electric cars in the world – benefit from 25 percent savings for an electric vehicle from day one, as electric cars are exempt from VAT for regularly fueled vehicles. There are no direct purchase subsidies, however.

Several countries are trying to support the mobility shift introduced by manufacturers with increasingly attractive and diversified e-vehicle offers. The following list compares some of the advantages offered by the most advanced electric car markets in the world – and offers some surprises.

China is the world’s largest market for electric cars. And sales there continue to grow strongly: 117 percent in the first quarter of 2019 alone. This growth is based on low-cost offers and a broader selection of E-models – and above all on regulatory incentives. Electric vehicles are not subject to registration restrictions or driving bans on certain days, that apply to vehicles with combustion engines in Chinese megacities. Purchase incentives also contribute to the enormous demand.

Purchase incentives, depending on range, have just been revised however, and will be cut later this year. For pure electric cars with a range over 400km, they will be reduced to CNY 25,000 (3,300 Euros) from CNY 55,000 (7,300 Euros). Electric ranges between 250km and below 400km will receive CNY 18,000 (2,400 Euros). Ranges under 250km will no longer receive purchase incentives. According to current information, purchase incentives will expire after 2020.

Last year, just over three quarters of a million pure electric passenger cars were registered here. With the addition of 247,000 plug-in hybrid electric vehicles (PHEV), it made the NEV (New Energy Vehicle) balance surpass one million units for the first time. An almost doubling in size within one year. Despite the reduction in subsidies, customer demand is expected to remain high due to government-imposed targets. Manufacturers are stepping up their NEV offerings, as electric cars are making a decisive contribution to meeting the average consumption fleet targets.

Norway has been a forerunner in the introduction of electric cars for several years, which is also reflected in its leading position in renewable energy feeding its energy grid, making it a real electric car halo market.

Almost every third vehicle sold in Norway in 2018 was electric. In the first quarter of 2019, almost every second vehicle registered was an electric car.

Thanks to this tax advantage, Norway is one of the few markets in the world where the price of an electric car is at the same level as that of a similarly sized vehicle with a combustion engine. Other advantages include limited use of bus lanes in selected areas and savings on ferry crossings, tolls and parking fees.

Since the summer of 2016, the German government makes an environmental contribution of 2,000 Euros to the purchase of a pure electric car, combined with the same amount by the manufacturer, corresponding to a total amount of 4,000 Euros. This bonus is limited to electric cars up to a value of 60,000 Euros. Electric cars are also exempt from vehicle tax for up to ten years. Since January of this year, users of electric company cars, which are also used privately, have been paying a reduced monthly amount of 0.5 percent of the so-called benefit-in-kind income tax on the purchase price of their vehicle. For other vehicles it is one percent.

A special tax bonus is also available dependent on the size of the vehicle’s battery. The list price value of the vehicle is reduced by 200 Euros per kilowatt-hour battery capacity up to a maximum of 10,000 Euros in 2019 and thus reducing the calculated list price of the vehicle and therefore the amount charged through income tax. This amount is reduced by 50 Euros each year and is currently planned to run up to 2022. Extensions to 2025 are however being considered.

France – up to 8,500 Euros when buying an electric car

France has a bonus-malus system (incentive/tax) under which vehicles with the highest CO2 emissions have to pay a surcharge – more than 10,000 Euros for the vehicles with the highest emissions. For electric vehicles, this in turn provides an incentive to buy: an ecobonus of 6,000 Euros can be claimed for the purchase of an electric car, but may not exceed 27 percent of the vehicle value. In addition, there is a scrappage bonus for older petrol or diesel models of up to 2,500 Euros. Combined, a total of 8,500 Euros of ecological bonuses are available for private consumers of electric cars.

In the Netherlands there are no registration taxes for pure electric cars. Registration tax is based on the CO2 emissions of a vehicle. By way of comparison, a petrol-powered vehicle with CO2 emissions of 100g/km is subject to a registration tax of 2,355 Euros for this tax alone. In addition, electric and hybrid vehicles are exempt from vehicle tax until 2020. For company car drivers who also use the vehicles privately, only 4 percent of the sales value (maximum 50,000 Euros) of an electric car is regarded as part of the driver’s income tax. The rate for conventional vehicles is 22 percent.

Plug-in vehicle grants of up to 4,000 Euros (GBP 3,500) are available to all consumers buying a pure electric vehicle in the UK. Plug-in hybrid vehicles are no longer eligible for a government purchase incentive but can claim up to GBP500 off the price of a home charging device. Private use of company cars is also subject to a lower benefit-in-kind tax rate of 13 per cent in the year 2018/19 – around half the rate as an equivalent petrol or diesel model, although planned increases are due over the years ahead. One further advantage, for motorists driving into London, up until December 2025, zero emission vehicles can enter the London Congestion Zone without having to pay the GBP11.50 daily price while also avoiding the additional GBP12.50 daily charge for entering the recently introduced Ultra Low Emission Zone (ULEZ).

Since last summer, Sweden introduced a Bonus-Malus system for incentivizing the purchase of electric cars, light-trucks and buses. These pure electric vehicles receive a purchase incentive bonus of 60,000 Swedish Krona (5,700 Euros). The climate bonus must not exceed 25 percent of the value of the vehicle however. For companies buying a climate bonus vehicle, the bonus must not exceed 35 percent of the difference of the new vehicle price and the new vehicle price of a comparable petrol or diesel vehicle. The bonus is paid directly to the owner six months after the vehicle is registered, preventing the vehicle being sold within that time period. For every gram CO2 above zero and up to 60g/km the bonus is reduced by 833 Swedish Krona per g/km.

Italy is the youngest market offering a significant incentive to buy electric cars. A new eco-bonus was introduced in March 2019 and runs until the end of 2021. A maximum government bonus of 6,000 Euros is on offer, combining a 2,000 Euros trade-in of a Euro 1 to Euro 4 vehicle, and/or 4,000 Euros – if no vehicle is traded-in – for vehicles emitting less than 20g/km of CO2.

Surprising perhaps, Romania is one of the leading markets when it comes to direct government subsidies for electric cars. With a government purchase incentive of 10,000 Euros on the table with an additional 1,500 Euros for scrapping a vehicle older than eight years, Romania is leading the way. This resulted in just over 600 pure electric cars being purchased last year corresponding to a 222 per cent increase over the previous year. 213 pure electric cars were registered during this year’s first quarter according to ACEA data.