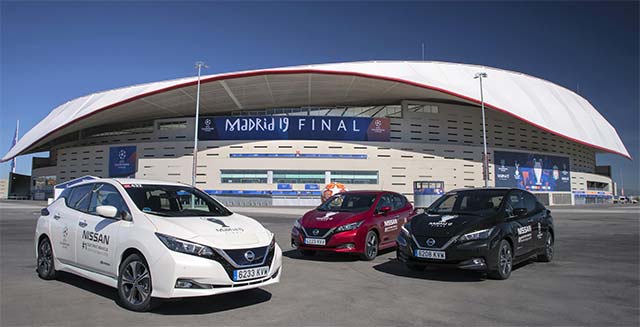 Nissan is powering the UEFA Champions League Final by providing 363 Nissan LEAF vehicles and e-NV200 vans to transport officials and visitors to Madrid, creating a mega-fleet that will cover more than 220,000 all-electric kilometers.

Now in its fifth season as Official Automotive Sponsor of the world’s largest annual sporting event, Nissan aims to improve air quality and reduce the environmental impact on the host city during this high-traffic weekend, with the largest zero-emissions fleet in the history of the competition.

This year the Nissan fleet also includes a Nissan LEAF NISMO RC 2.0 race car, which will be used by Brazilian football legend Roberto Carlos as he delivers the UEFA Champions League Trophy from the UEFA Champions Festival in Puerta del Sol to the Estadio Metropolitano.

With dual electric motors, all-wheel drive and an aggressive body shape – as well as a custom-designed aerodynamic trophy display case for this event – the LEAF NISMO RC 2.0 demonstrates the latest in the performance side of Nissan Intelligent Mobility technology. It has double the maximum power and torque output of its predecessor, containing advanced electric battery technology and drivetrain components sourced from the Nissan LEAF, the world’s best-selling electric car.

The final comes as Nissan prepares to begin deliveries of the new LEAF e+ to European customers, introducing a new 62kWh battery with a range of 385km, new personalisation options and equipped with Nissan’s e-Pedal and ProPILOT technologies.

Gareth Dunsmore, Divisional General Manager of Marketing Communications, Connected Car Services, Customer Experience, at Nissan Europe said: “The Champions League Final and Nissan’s electric vehicles are a perfect match because they are both exciting and at the top of their game. We are thrilled to offer attendees the experience of zero emissions transportation on the streets of Madrid, a city that is already at the forefront of the electric vehicle revolution.”

The city of Madrid has banned old diesel and petrol cars from some parts of the city centre as part of a move to reduce congestion and pollution. A new low-emissions zone covers 472 hectares (1,166 acres) and means that all petrol vehicles registered before 2000 and diesel ones registered before 2006 are banned from the area unless they are used by residents of the area or meet other exemptions. Only vehicles with zero emissions are permitted in downtown Madrid and the city has installed more than 110 car chargers to encourage further electrification. To bolster that infrastructure over the course of the UEFA Champions League Final weekend, Nissan has added an additional 36 chargers around the city which will all be deployed in Spain after the event.

The Nissan LEAF is made at Nissan’s award-winning plant in Sunderland, UK, for export to markets across Europe, including Spain. The LEAF remains the world’s best-selling electric vehicle, with global sales of more than 410,000 and sales in Europe leading the competition with 41,589 units in 2018.

Jun 1, 2019Blagojce Krivevski
Skai fuel-cell flying vehicle has a range of 400 milesKia recalls over 5,000 Niro PHEV and Hybrid in UK