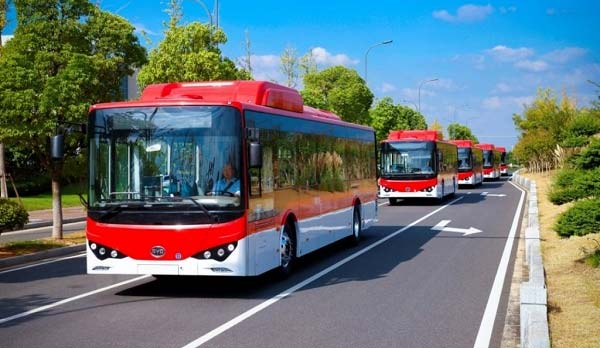 The Chilean government recently announced a new order for 183 pure electric buses for the Chilean capital of Santiago, due to arrive in August of this year.

The 183 units of BYD pure electric buses will join the 100 electric buses that BYD and local partner Enel brought into Santiago last December, giving BYD a dominant share of more than 60% in the capital’spromising electric bus market.

They will be integrated during the last quarter into the existing Metbus fleet to operate the popular Avenida Grecia route, becoming the first route operated by only electric buses in Latin America. Metbus is also one of the largest pure electric bus fleet operators in the Americas.

With this new batch of BYD buses, there will be a total fleet of 411 electric buses operating in the capital, making Santiago the city with the largest pure electric bus fleet outside of China. These buses can seat up to 38 passengers each, and come equipped with BYD’s cutting-edge battery technology, with a single charge covering over 250 kilometers. It’sworth noting that all these electric buses will have air conditioning, offer universal accessibility, as well as Wi-Fi and USB ports.

“We started this year with 203 electric buses that received great feedback from users, who rated them with 6.3 (out of 7.0)”, said Gloria Hutt, explaining that the city will end this year with more than double that number. Programs similar to Santiago will be extended to other Chilean regions, starting with the city of Concepción.

“As the market for emissions-free public transport picks up pace in South America, Chile is rapidly emerging as a key hub in this movement,“ said Tamara Berríos, Country Manager of BYD Chile, “BYD is delighted to provide Chile with its cutting-edge green transit solutions, and remains committed to supporting the country’s ambitious plans for a cleaner, greener future, powering forward Chile’s public transport electrification revolution.”

“We hope that during the next year, through the bidding process, electromobility will continue to be strengthened in the capital and in other regions,” said the Director of Metropolitan Public Transportation, Fernando Saka. “This not only contributes to environmental conservation but also to people’squality of life. In this way, we will also comply with the commitments we have made with the Paris Agreement and de-carbonization.”

Relatedly, Chilean President Sebastian Piñera on April 28, 2019, paid an exclusive visit to BYD’sglobal headquarters in Shenzhen, emphasizing the “unlimited opportunities” for future cooperation between his country and BYD, as part of a state visit to China.

At present, BYD pure electric buses are successfully servicing markets in many countries across Latin America, including Chile, Colombia, Argentina, Brazil, Ecuador, and Uruguay. Globally, BYD’s pure electric buses, taxi, and other vehicles have spread to over 300 cities, in more than 50 countries and regions.

Jun 15, 2019Blagojce Krivevski
Dendrobium D-1 Stuns As First Electric Hypercar To Be Shown At The Le Mans 24 Hours With MichelinVolkswagen ID.R returns to Goodwood to defend its title